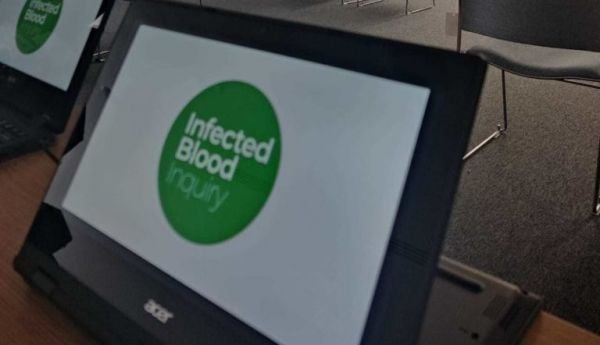 A landmark tribunal into the use of contaminated blood products in Ireland led to a “culture change” in how patients were treated, the UK inquiry has been told.

Brian O’Mahony, chief executive of the Irish Haemophilia Society, said Ireland’s Lindsay Tribunal was also “hugely important” in advancing the general public’s understanding of what had happened to people treated with infected blood.

Longstaff and his team are investigating a scandal that resulted in an estimated 2,400 deaths of patients infected with HIV and hepatitis C in the UK through contaminated blood products in the 1970s and 1980s.

Most of those involved had the blood-clotting disorder haemophilia and relied on regular injections of the US product Factor VIII to survive.

Today’s witness, Brian O’Mahony, has now been sworn in and is being questioned by Lead Counsel – Jenni Richards KC.

He begins his evidence with an overview of his career and various roles and responsibilities. pic.twitter.com/dVc8F1X912

They were unaware they were receiving contaminated product from people who were paid to donate, including prisoners and drug addicts.

Patients were injected for years despite repeated warnings at the top of government.

Some victims were infected after receiving blood transfusions.

A similar scandal involving infected blood products happened in Ireland and on Tuesday the inquiry was told how the state responded.

Mr O’Mahony outlined steps that had been taken over the last 30 years, including the establishment of a compensation tribunal that has paid out millions of euro; the provision of special health cards that give victims access to a range of free services; and the creation of bespoke insurance schemes for those affected.

He also reflected twenty years on from the publication of the Lindsay Tribunal report.

Mr O’Mahony said the testimony of those affected was a key aspect of the tribunal’s work.

“The personal testimony was hugely important,” he said.

“The public understanding of what had happened to the community was very, very important.

“And the understanding was frankly helped by very responsible media coverage in the Irish media – all of the main daily newspapers covered it in great detail.

“I think the apology from the Government after the report came out, the compensation which was put in place without having to wait for the inquiry report, the HAA card, the insurance, the tax concessions, these were all really important in an overall view that ‘look, this happened, this was an awful thing that happened to you, we’re really sorry and we’re going to make it up to you in any way that we can’.”

He said patients now had a key role in co-designing treatment services for people with blood disorders.

“I think the culture has changed,” he said.

“I think everybody realised that this can’t be allowed to happen again.”

In the UK, thousands of victims of the infected blood scandal received interim compensation payments of £100,000 last month following a recommendation by Longstaff,

The inquiry, which was announced by then-prime minister Theresa May in 2017 and began the following year, has taken evidence from more than 5,000 witnesses during hearings across all four nations of the UK.

It has featured harrowing evidence from patients and their families who described being kept in the dark about the risk of HIV infection among haemophiliac patients, having to keep their diagnoses private through fear of vilification at the time of the Aids crisis, and living with the physical effects of HIV.