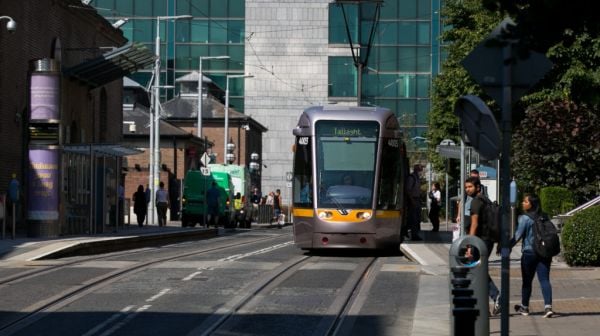 Luas tram drivers would never get anywhere if they had to “slow down to a crawl” every time they saw someone approaching the tracks, Judge Terence O’Sullivan has stated in the Circuit Civil Court.

Dismissing a €60,000 personal injuries claim by a passenger who was thrown forward when a driver was forced to apply the emergency brake, Judge O’Sullivan said it would be unreasonable to expect the Luas to slowly crawl through Dublin.

He directed that taxi driver Michael Keane (39), of Blackhorse Grove, Blackhorse Avenue, Dublin, pay the legal costs of Transdev Dublin Light Rail Ltd in defending the case in which a jogger, veering towards the tram, had caused the emergency braking.

Barrister Simon Kearns, who appeared with Caitriona Kinane of Corrigan and Corrigan Solicitors, told the court that Luas drivers, who carry 44 million passengers every year, were instructed to apply the emergency brake in potentially dangerous situations.

He said that in the case before the court the driver had braked suddenly when a jogger had veered off the footpath only split seconds away from the oncoming tram.

Keane, who said he had pursued two previous personal injury claims and obtained €22,500 damages, told Mr Kearns that as a taxi driver he accepted there would be emergencies arising on the roads but in such situations he would slow down.

He said he had been travelling on the tram during the St Patrick’s weekend in 2018 and had been thrown forward off a side seat in the tram when it suddenly stopped, injuring his neck and right shoulder.

Judge O’Sullivan, after several times viewing the jogger stepping off the footpath to within inches off the tram tracks, said Mr Keane had been very unfortunate but when public service vehicles were forced to apply emergency brakes there would be a certain amount of disruption.

“I do not think it is reasonable to expect tram drivers to slow down to a crawl when someone approaches the vehicle,” Judge O’Sullivan said. “From the CCTV I have watched leading up to this incident, there were at least two instances when the driver might have been justified in hitting the anchors and particularly in one case when a woman and child crossed ahead of the tram.”

The jogger involved had clearly moved off the footpath to such an extent that prudent driving would require a driver to apply the emergency brake as instructed in training.

“The jogger is probably more responsible in liability to Mr Keane, but he is not before the court,” Judge O’Sullivan said. “I cannot in all conscience hold the defendant negligent in the circumstances.”