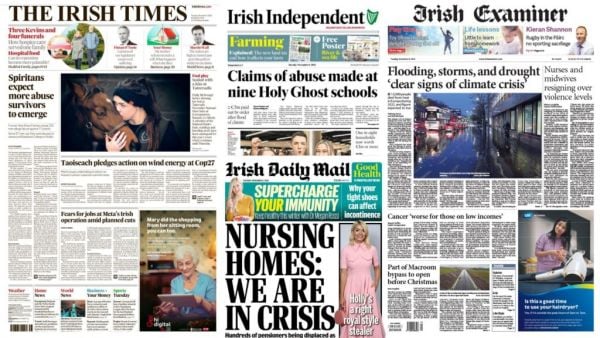 Abuse allegations at Blackrock College and other schools run by the Spiritan congregation make the front pages on Tuesday.

The Irish Times reports that the Spiritan congregation expects further abuse survivors to come forward after disclosing that 233 men have made allegations of abuse against 77 Irish priests from the religious order. The Irish Independent has confirmed the Spiritans have payed out more than €5 million to abuse victims since 2004. 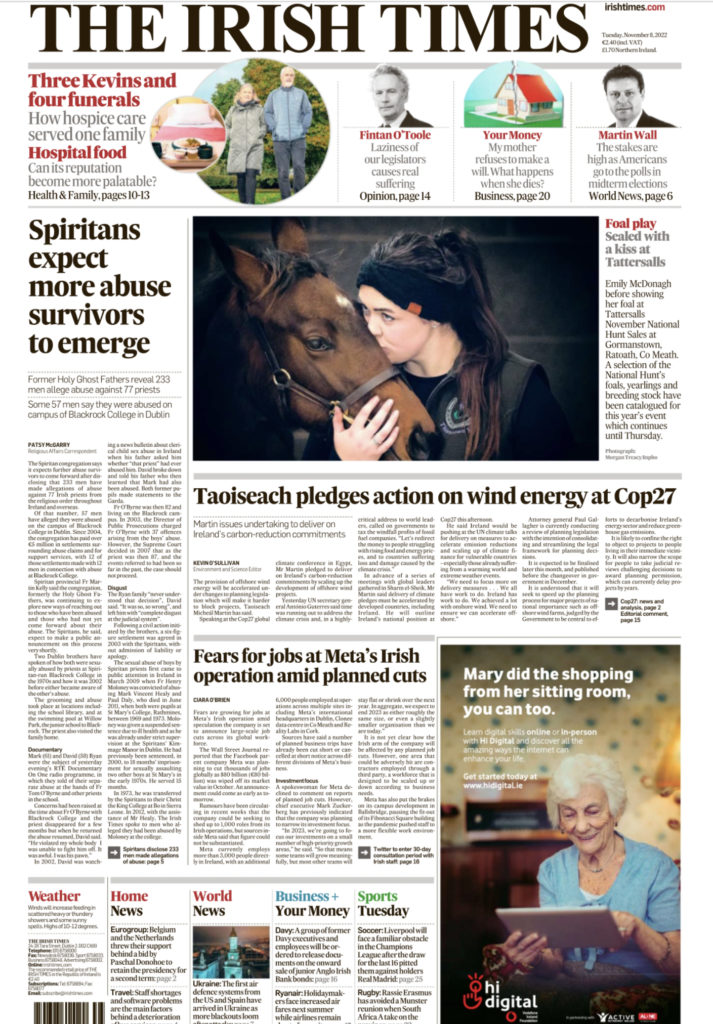 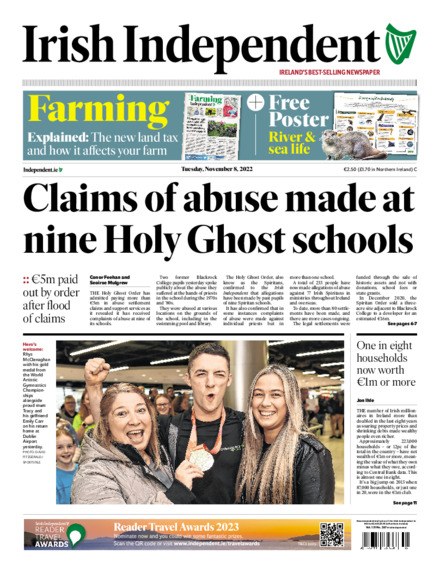 The human toll of climate change is on the front page of the Irish Examiner. Following flooding in Cork city centre on Monday evening, the paper says increasing rain downpours are part of what the UN has described as the “unequivocal signs of the unfolding climate emergency”. 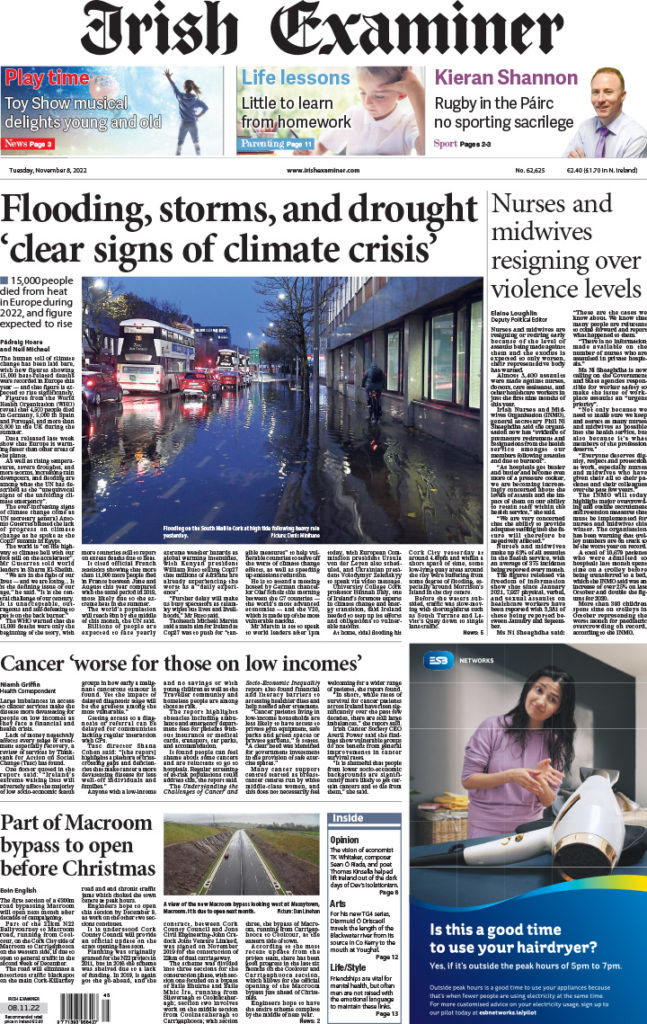 The Irish Daily Mail reports on the impact of soaring energy costs and price hikes on nursing homes. 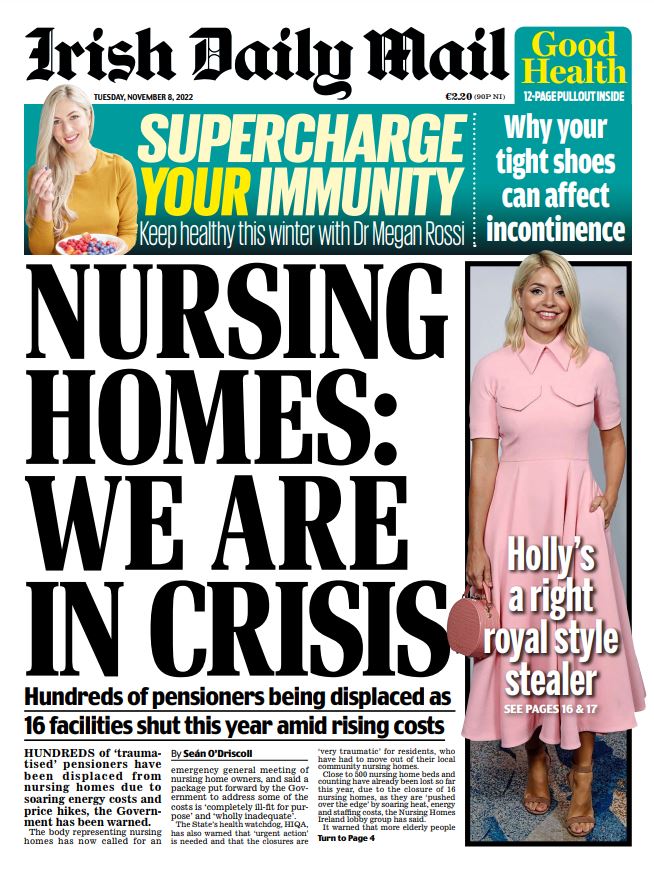 The Irish Sun has the latest from the trial of Gerry ‘The Monk’ Hutch at the Special Criminal Court. 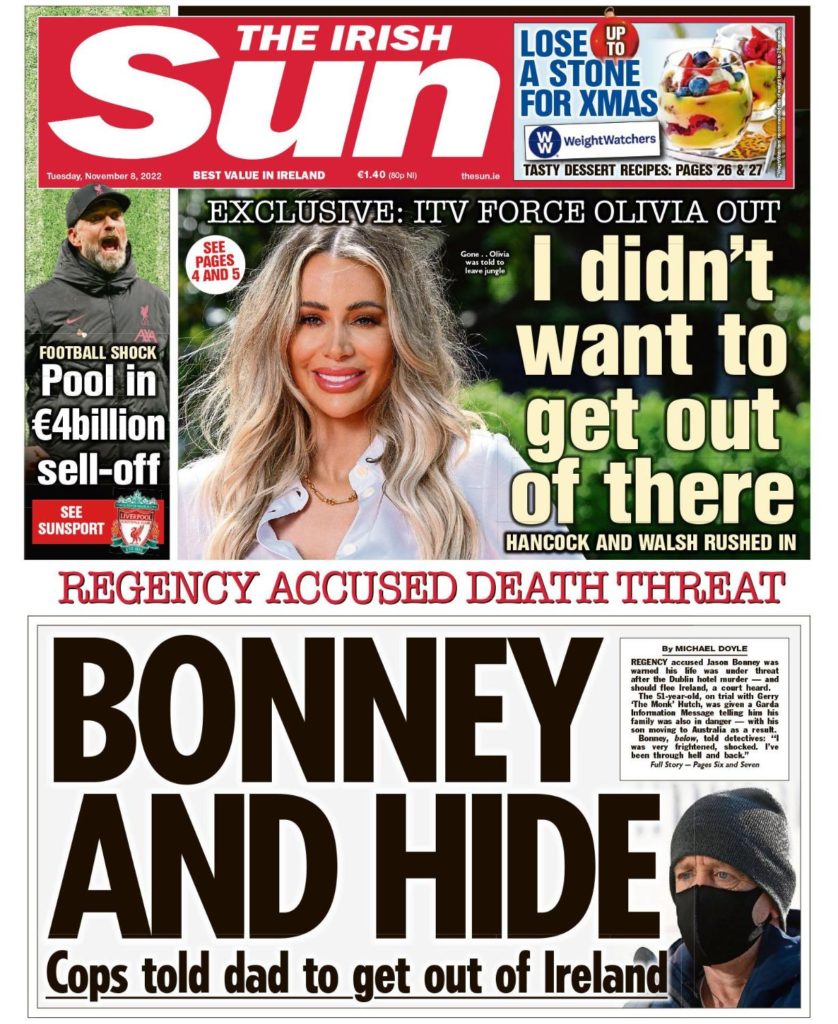 The Belfast Telegraph reports that a tribunal found a doctor acted dishonestly in attempting to conceal the true circumstances of the death of a nine-year-old patient. 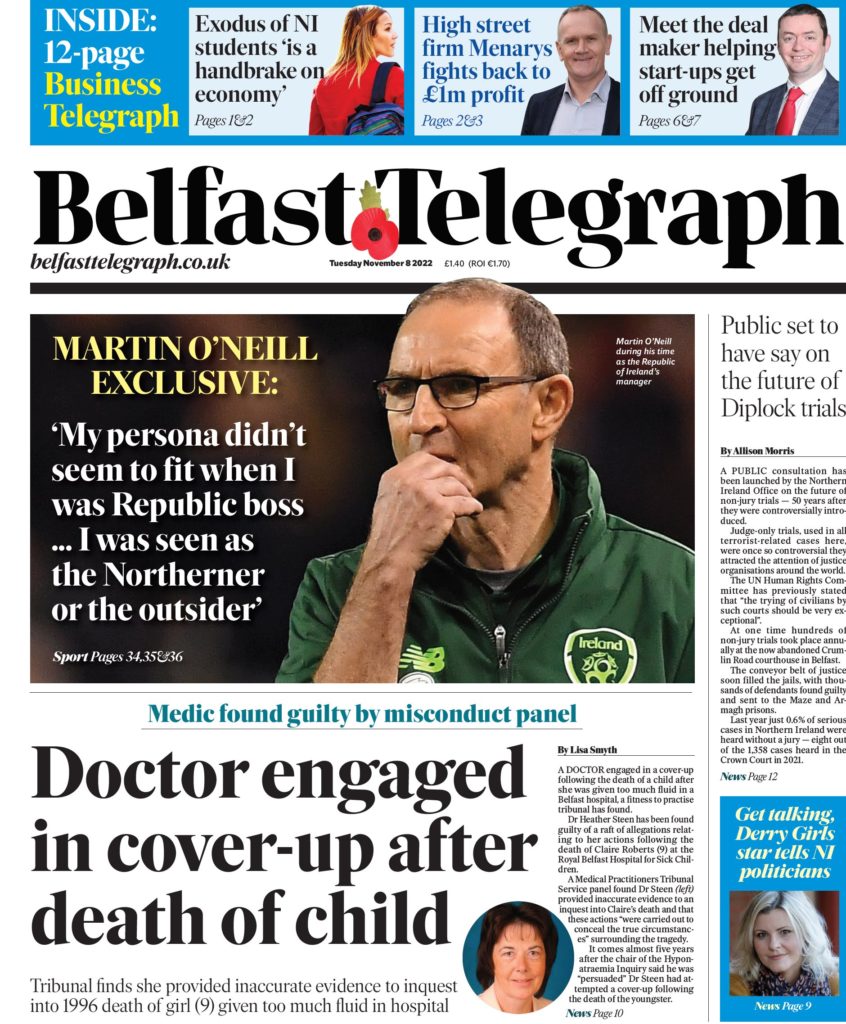 The DUP is expected to come under renewed pressure to end its boycott of the Stormont institutions amid the increasing potential for EU-UK agreement on the protocol, The Irish News reports. 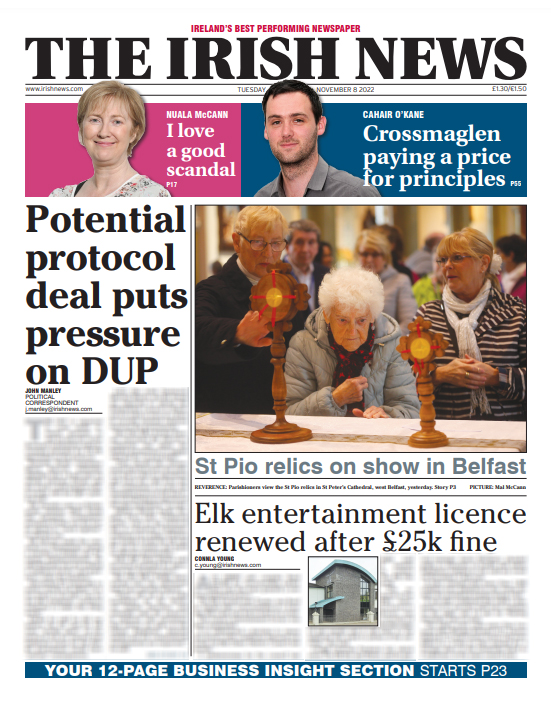 Goings-on at the latest round of UN climate talks in Sharm El-Sheikh, Egypt, lead many of the British front pages.

The Daily Express focuses on the first face-to-face meeting between the British prime minister and his French counterpart who held talks on the side-lines of Cop27 about tackling the migrant crisis.

“Sunak turns on the sharm,” the Metro says of the meeting with Emmanuel Macron.

SUNAK TURNS ON THE SHARM

Rishi Sunak has “shunned” pleas for climate crisis reparations, The Independent says, with The Guardian adding that industrial nations have been “condemned” at the summit for failing the developing world.

The Daily Mail, meanwhile, takes a disparaging tone to calls for the UK to pay reparations to poorer nations hit by climate change.

Mr Sunak is poised to announce a major gas deal with America after the Cop27 climate change summit, The Daily Telegraph reports.

Away from the conference, the Financial Times writes that the UK’s finance minister is planning a “stealth raid on inheritance tax”.

While The Times reports that the UK is planning to increase pensions and benefits in line with inflation.

Elsewhere, the former British health secretary Matt Hancock and Seann Walsh are set to enter the jungle early to “save” I’m a Celebrity after Olivia Attwood is “forced to quit”, The Sun writes.

On tomorrow’s front page: Matt Hancock and Seann Walsh set to enter jungle early to save I’m a Celebrity after Olivia Attwood is forced to quithttps://t.co/1xq2x9Zue3 pic.twitter.com/D5UfEVUboU

The Daily Mirror splash focuses on the story of a 30-year-old woman who will become the UK’s first named person to be publicly dissected on television after donating her body to medical science following her death from tear gland cancer.

And the Daily Star has the husband of late EastEnders actress Dame Barbara Windsor saying he still feels her “by my side” in the home they shared together.