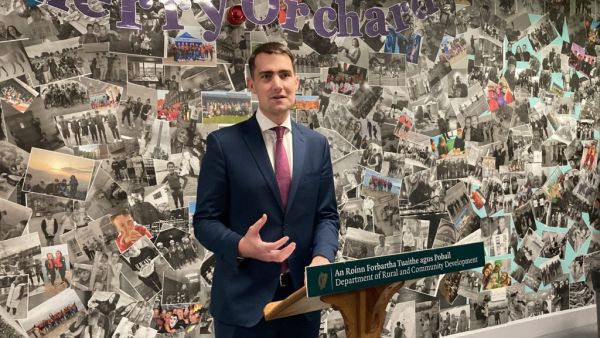 Irish broadcasters must “shine a light” on the serious issues in Qatar during their World Cup coverage, the Government Chief Whip has said.

Junior Minister for Sport Jack Chambers said he was “very concerned” by the awarding of the Word Cup to the country given the controversies about its human rights abuses.

The Government Chief Whip also accused Fifa of being “out of touch” for trying to dismiss the “serious issues”, adding it was “right” that they are discussed.

Qatar was chosen as host of the 2022 men’s football World Cup more than a decade ago.

Since then it has faced growing criticism over its human rights record, in particular its treatment of migrant workers and LGBTQ+ people.

“Obviously we had the awarding of the World Cup to Qatar [that] was mired in controversy and corruption. The impact on many migrant workers, the fact that thousands [of people] have died, they’ve had serious human rights abuses, is extremely concerning.

“And then the background: indiscriminate laws around the LGBT community in Qatar, and the repeated comments. We saw comments in the last 24 hours I think from diplomatic division of Qatar that was shocking and concerning.”

Mr Chambers was referring to comments aired on Monday night by an ambassador for the World Cup in Qatar who described homosexuality as “damage in the mind”.

Former Qatari footballer Khalid Salman told a German public broadcaster that being gay is “haram”, or forbidden in Arabic, and that he has a problem with children seeing gay people.

Speaking at the launch of the Government’s Dormant Accounts Fund Action Plan for 2023, Mr Chambers said: “Fifa have been out of touch in trying to dismiss, you know, the having to have solely a football focus when it comes to the World Cup in Qatar.

“I think it’s right that people discuss the serious issues that are there and the controversies around human rights abuses.”

He added: “RTÉ are showing the World Cup and fans will be watching it. But it will be incumbent on our broadcasters to shine a light and to discuss the issues in Qatar as the World Cup is occurring and to have that as an ongoing, open, repeated discussion.”

Amnesty International reported last month that, despite some government reforms, human rights abuses in Qatar “persist on a significant scale”.

Homosexuality is illegal in Qatar and anyone found participating in same-sex sexual activity can be punished by up to seven years in prison.

The nation also operates a version of Islamic Sharia law that criminalises sexual activity between men and carries a maximum penalty of death by stoning, even though there is limited evidence of the law being enforced in recent years.

World Cup organisers have said “everyone is welcome” regardless of a person’s sexual orientation and said guests would not face discrimination.

On Tuesday, former Fifa president Sepp Blatter described the choice of Qatar as a “mistake”.

The tournament gets under way on November 20 with England versus Wales.

Mr Chambers made the comments in Cherry Orchard in Dublin as a group of Government ministers unveiled details of a €54.5 million fund aimed at supporting disadvantaged communities and vulnerable groups next year.

It includes €12 million for Sport Ireland to increase participation, particularly for young people who need extra encouragement to take up a sport, €5 million to deliver employment and educational support programmes for people with disabilities and family carers, 3.8 million for Traveller initiatives and services across five departments and €3 million to provide older people with personal safety alarms under the Senior Alerts Scheme.

The Cherry Orchard Equine Centre is Centre is set to receive €123,200 under the action plan which will support Garda Youth Diversion Projects and initiatives to help young people find employment.