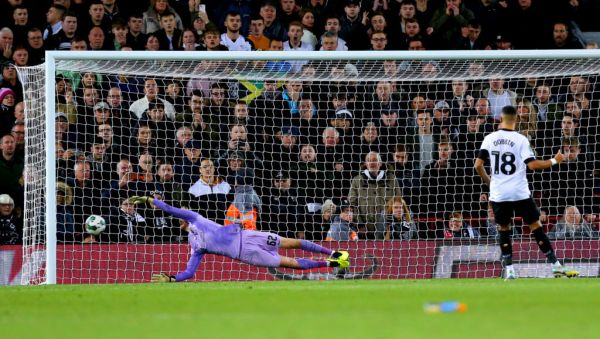 Liverpool’s defence of the Carabao Cup began the way it was won with a penalty shoot-out victory in which goalkeeper Caoimhin Kelleher played a pivotal role.

The Republic of Ireland international, playing his first game since scoring the winning spot-kick against Chelsea at Wembley in February, saved three Derby penalties as Jurgen Klopp’s untried side scraped past their League One opponents after a goalless draw.

Harvey Elliott, introduced as a 65th-minute substitute along with Roberto Firmino and Darwin Nunez, scored the decisive kick as the disappointing hosts won 3-2 in the shoot-out.

That it had reached that point was perhaps no surprise as Liverpool, who registered 11 changes from Sunday’s win over Tottenham, have not won a League Cup tie in normal time at Anfield since a 2-0 victory over Leeds in November 2016.

The five other senior outfield players had made just 25 starts between them this season and Joe Gomez accounted for 11 of those.

Derby, 46 places below their hosts, knew their best chance was to frustrate and hope to take an opportunity when it came so when Liverpool entered their half they dropped into a back five, sometimes six, and the inexperienced midfield and forward line struggled to come up with a solution.

In truth Liverpool looked like they were treading water until the introduction of the three senior players off the bench with 25 minutes to go.

Half-chances came and went as Alex Oxlade-Chamberlain volleyed narrowly wide after Craig Forsyth only half-cleared a corner with his head, Stewart sliced over in front of goal from Fabio Carvalho’s cross and Kostas Tsimikas snatched at a shot after goalkeeper Joe Wildsmith flapped at a cross.

Physicality was a problem for Liverpool and that was highlighted when the fleet-footed Carvalho broke down the left only to be eased off the ball and onto the floor by Eiran Cashin’s shoulder charge.

Bajcetic played with his socks down like Thiago Alcantara – whose father Mazinho played with Bajcetic’s dad Srdan at Celta Vigo during the 1996-97 season – but while he had the energy unfortunately for Liverpool he did not have the passing range of the more experienced Spaniard to unlock a stubborn defence.

But it was more of a missed opportunity for the likes of Oxlade-Chamberlain, with only 15 minutes of football to his name before this game, who did not exert enough influence in midfield.

Three outstanding saves from Kelleher as we progress to the next round of the Carabao Cup 🙌 pic.twitter.com/k9fAF3kXqc

Derby captain Max Bird dragged wide their best chance early in the second half after some penalty-area pinball and, although Oxlade-Chamberlain’s deflected shot and Carvalho forced saves from Wildsmith, Klopp sent for his big guns with 25 minutes to go.

The intensity and quality was immediately lifted and the introduction of the tigerish winger Ben Doak, two days short of his 17th birthday, for his debut added some directness to Liverpool’s right-hand side.

Elliott was denied by a reflex save 10 minutes from time having been picked out by Oxlade-Chamberlain’s ball over the top, Wildsmith then reacting similarly to keep out a Firmino header.

In between, Derby substitute David McGoldrick’s downward header proved easy pickings for Kelleher but, ultimately, neither goalkeeper was tested enough until Liverpool’s came to the fore when it mattered.