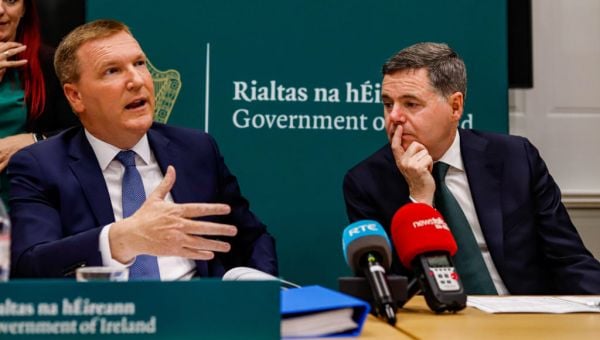 Minister for Public Expenditure Michael McGrath has said he supports the decision to nominate Paschal Donohoe as Eurogroup president.

The Fianna Fáil minister said that the Eurogroup presidency would be “distinct and separate” from the role of representing Ireland at the Eurogroup – the gathering of euro-using countries’ finance ministers.

Minister for Finance Donohoe was nominated for a second term as president of the Eurogroup on Monday, and will retain the role when Mr McGrath is expected to take on the finance portfolio in December.

Both are expected to attend Eurogroup meetings if Mr Donohoe wins a second term as Eurogroup president.

The finance brief and public expenditure portfolio will then be swapped between Fine Gael’s Mr Donohoe and Fianna Fáil’s Mr McGrath.

Mr McGrath had said previously that not having Ireland’s finance minister at the Eurogroup would represent “a significant diminution” of the ministry.

Speaking for the first time since the Government confirmed that Mr Donohoe would be Ireland’s nominee, Mr McGrath said he supported the move.

“I, and the Government, strongly support Minister Donohoe’s re-election bid to be president of the Eurogroup for a second term, and I think he’s done an exceptionally good job,” he told RTÉ’s News at One.

“I think it is a positive for Ireland, and if the opportunity is there, then we certainly want to take that opportunity to get a second term to have an Irish presidency of the Eurogroup.

“But what it will mean in effect is that the serving Irish Minister for Finance will attend both Eurogroup and EcoFin as the Irish representative, so as the person who sets out and speaks for Ireland in terms of the policy issues that come before Eurogroup and EcoFin.”

EcoFin is the collective of the EU’s economic and finance ministers.

Mr McGrath said that the role of Eurogroup president would be “quite distinct and separate”, and would be more impartial than the role of minister for finance at those meetings.

“It is the case that whoever is serving as the Irish minister for finance, is the national representative and is the person who at those fora (forums) – Eurogroup and ECOFIN – sets out the Irish position and argues for the Irish position.”

When asked what the advantage of having an Irish president of the Eurogroup was if they had to remain impartial, Mr McGrath responded: “I think there are advantages in having an Irish minister, somebody who knows our country intimately and who has our national interest as a priority serving in such an influential position.”

The next president of the Eurogroup will be chosen on December 5th.