Much-changed Arsenal dumped out of the Carabao Cup by Brighton 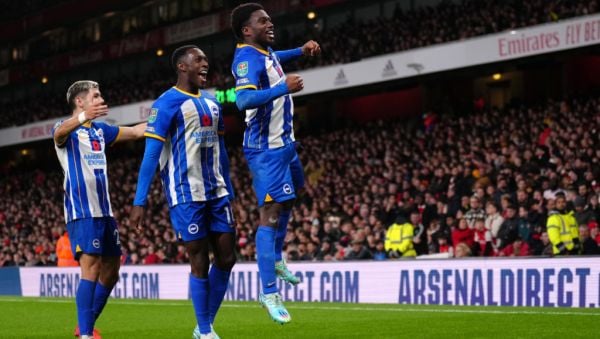 A much-changed Arsenal side crashed out of the Carabao Cup at the hands of Brighton as debutant goalkeeper Karl Hein had a night to forget.

The Gunners sit top of the Premier League and qualified as winners of their Europa League group, but Mikel Arteta made 10 alterations for the tie and Brighton came from behind to win 3-1 at the Emirates Stadium.

Eddie Nketiah finished off a fine move to put the home side ahead before Hein fell over and conceded a penalty all in one motion as former Arsenal man Danny Welbeck levelled from the spot.

Two breakaway goals after the interval, firstly through substitute Kaoru Mitoma and then Tariq Lamptey, saw Brighton advance to round four.

It was a first home defeat in 12 games for Arsenal, the last also coming at the hands of the Seagulls, who have now lost just one of their last five visits.

With only William Saliba retaining his place from Sunday’s win at Chelsea, it was no surprise Arsenal started in a disjointed fashion, allowing Brighton several long-range chances on goal.

Welbeck saw a shot blocked before Jeremy Sarmiento fired just over and Julio Enciso also missed the target for the visitors.

Brighton were made to rue their inability to capitalise on a slow start from their hosts, falling behind to a fine finish from Nketiah, who curled home having been picked out by Reiss Nelson.

This is Nketiah’s competition for sure, the former England Under-21 international having now netted 11 goals in 12 League Cup appearances.

But Hein then had his moment to forget, slipping over as Welbeck ran through and picking himself up only in time to bring down the marauding forward, who duly sent the beleaguered goalkeeper the wrong way from the resulting penalty.

Nketiah hit the post soon after the restart, his low strike tipped onto the woodwork by Jason Steele before the Brighton goalkeeper made a fine stop to keep out Nelson’s header moments later.

Brighton turned things around just before the hour as Mitoma, off the bench at the break, coolly finished past Hein before Arteta reacted by throwing on Gabriel Martinelli and Gabriel Magalhaes.

He was soon turning to his bench again, this time Gabriel Jesus and Oleksandr Zinchenko were introduced after Lamptey has doubled Brighton’s lead following a driving run into the box.

With Granit Xhaka also coming on late on, Arsenal finished the game with half the outfield players who had started the 1-0 win at Chelsea – but it was not enough to bring about a late comeback.