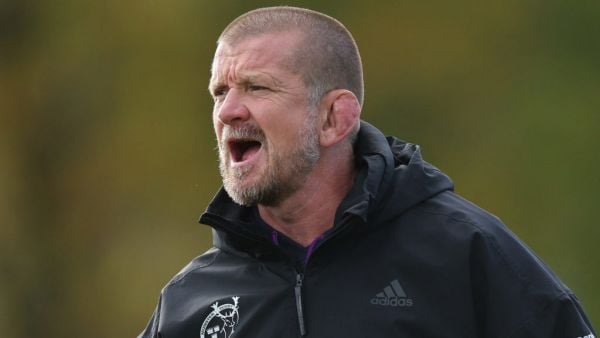 After Ireland kicked off their Autumn series with a win over world champions South Africa, Munster will have the chance to take on a select Springboks XV this Thursday night.

Páirc Uí Chaoimh will be the venue for the game with over 41,000 spectators expected to show up.

Jack O’Donoghue captains the side which has three Munster Rugby Academy players named in the squad.

Academy lock Edwin Edogbo keeps his place in the second row with Cian Hurley and Patrick Campbell among the replacements.

Antoine Frisch makes his first start for Munster after recovering from a calf injury suffered on the Emerging Ireland tour to South Africa.

Kiran McDonald partners Edogbo in the second row on his first Munster appearance after joining on a short-term deal last month.

Mike Haley starts at full-back with Shane Daly and Zebo on either flank.

Rory Scannell and Frisch form the centre partnership for the first time with Paddy Patterson and Healy in the half-backs.

Wycherley, Diarmuid Barron and Salanoa pack down in the front row with Edogbo and McDonald in the engine room.

O’Donoghue, John Hodnett and Coombes complete the side.

Barron, Coombes and Daly were all in action for Ireland A against the New Zealand XV last week.

Rory Scannell and Niall Scannell are the only two players in this squad who played in Munster’s last game against a touring side, the Maori All Blacks, in 2016.

In terms of the visitors, Aphelele Fassi, Cornal Hendriks, Johan Goosen and Herschel Jantjies are the capped Boks in the backline. Jean-Luc du Preez, Elrigh Louw, Ruan Nortje, Jason Jenkins and the entire front row of Du Toit, Ntuthuko Mchunu and Joseph Dweba will all bring their Test match experience to a strong and physical pack of forwards.

Du Toit will captain the team, with Hendricks serving as his deputy.