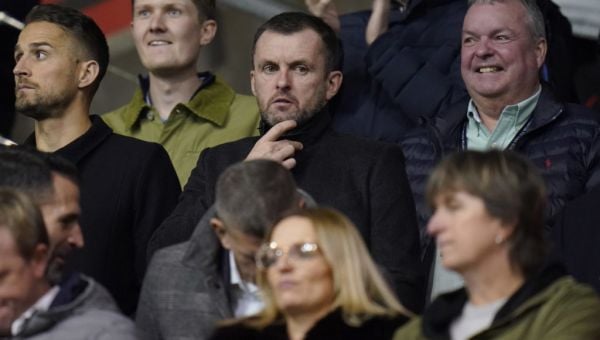 Nathan Jones was given a warning about the extent of the task facing him at Southampton after seeing his prospective new side scrape past Sheffield Wednesday on penalties in the Carabao Cup.

Welshman Jones watched from the stands at St Mary’s as goalkeeper Alex McCarthy saved Dominic Iorfa’s spot-kick to spare Saints’ blushes in a 6-5 shoot-out triumph over League One opposition.

The current Luton boss is expected to be confirmed as successor to the sacked Ralph Hasenhuttl before Saturday’s Premier League trip to Liverpool.

He witnessed a Saints team led by interim boss Ruben Selles labour to a 1-1 draw in 90 minutes, with James Ward-Prowse’s penalty on the stroke of half-time cancelling out Josh Windass’ opener.

England World Cup hopeful Ward-Prowse, Mohamed Elyounoussi, Ibrahima Diallo, Ainsley Maitland-Niles, Adam Armstrong and Theo Walcott were then each successful from 12 yards, before McCarthy repelled Iorfa’s low effort with his legs to secure a place in round four.

Jones quickly emerged as the frontrunner for the vacancy and he posed for photos with home fans before kick-off, having taken charge of current club Luton’s 2-0 loss at Stoke on Tuesday evening.

The 49-year-old would have been concerned by a fragmented first-half performance in which the lively South Yorkshire visitors repeatedly threatened and initially led.

Livewire Windass claimed the 24th-minute opener, emphatically thumping his sixth goal of the season beyond McCarthy after being slipped clear by Fisayo Dele-Bashiru.

With Wednesday pushing for promotion to the Championship and Saints battling relegation, the two clubs could well be meeting again next season.

The healthy travelling following wasted little time in taunting their rivals about that possibility and chants of ‘we’re going up; you’re going down’ regularly rang around an increasingly exasperated stadium.

Restless home supporters, who also saw McCarthy deny goal-scorer Windass on two other occasions, as well as Owls captain Barry Bannan, seemed to be gearing up to boo off their under-performing side at the break.

But Saints players avoided that increasingly familiar treatment after Wednesday’s hard work was undone in added time when defender Marvin Johnson dangled a leg to bring down Moussa Djenepo in the box.

Referee John Brooks immediately pointed to the spot and captain Ward-Prowse duly smashed the penalty down the centre of Stockdale’s goal to change the complexion of the contest.

The Owls, who sit third in League One, were the last club from outside the top division to lift the League Cup following victory over Manchester United in the 1991 final.

Darren Moore’s men were not about to roll over, albeit defender Michael Ihiekwe twice cleared off the line from substitute Walcott just after the hour mark following sloppy distribution from Stockdale.

Saints thought they had been spared the jeopardy of penalties three minutes from time but Stuart Armstrong’s deflected effort came back off the crossbar and Duje Caleta-Car was unable to head home the rebound.

While Southampton’s spot-kicks were flawless, Jones will be in no doubt about the job facing him ahead of his first spell in Premier League management.