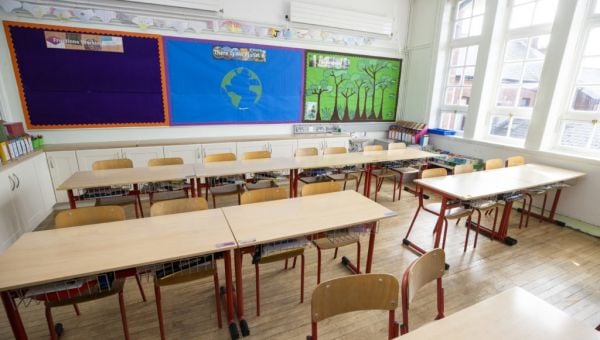 A primary school has been ordered to pay €12,000 compensation to a young girl with Down syndrome after she had to spend most of her school day in a foyer outside the classroom.

At the Workplace Relations Commission (WRC), adjudicator Thomas O’Driscoll said the “unprecedented actions” of the school in having the girl spend a considerable part of her day in a foyer outside the classroom “reinforced the idea to the other children, and alarmingly for her sister that it might be normal to exclude children with special needs”.

He said: “This should never have been the case.”

The girl started in junior infants in September 2016 and was taken out of the school by her parents in April 2019 when she was in first class.

Mr O’Driscoll said: “This is an unfortunate case and I accept in the main that the school was not resourced as fully as it should have been, but nevertheless I found that there were aggravating factors.”

He said he was satisfied from the evidence given that the reason for the decision of the parents to remove their daughter from the school was because of the exclusion of the child from full social and academic activity.

He said it was unacceptable for the school to fail to consult with the mother on her daughter spending most of her day in a learning space in the school foyer.

The girl’s mother told the WRC hearing that there was no communication from the school about the fact that her daughter was spending most of her school day outside the classroom with her special needs assistant (SNA).

The mother said she became concerned when her other daughter, who was in the class, told her that her sister was not in the classroom.

Asked why she brought the discrimination proceedings on behalf of her daughter, the mother said it was the last resort and that it was very upsetting to the family that her daughter was not included in the class environment.

An education officer with Down Syndrome Ireland (DSI) said this was the first time that a school had refused an offer of support from the organisation.

She said she had never come across a situation where a workstation for a child was located outside the classroom and that time in the classroom was negligible for the girl.

In his findings, Mr O’Driscoll said he found it quite concerning that the girl was timetabled to be outside the classroom for most of her learning day and that the learning, in essence, had become the prime responsibility of the SNA rather than the class teacher.

He said: “Clear evidence was given that the role of the SNA was to look after the care needs of the Complainant as well as to reinforce the learning picked up at the classroom.”

Mr O’Driscoll said the reality was that the girl had very little time allocated for learning and had neither access to her teacher, nor peer models.

Mr O’Driscoll stated that undoubtedly, the girl’s behaviour was challenging for the staff, as they described it, but instead of seeing the “challenge” as how best to deliver and meet the educational needs of all in their charge they attributed the problem to her.

He said: “Their solution was to remove her from the situation. This defensiveness was manifested further in the refusal to accept a more than reasonable offer of specialised support from Down Syndrome Ireland.”

Mr O’Driscoll said he was satisfied that the girl could have been reasonably accommodated by a workstation in the classroom and only to be withdrawn when she was tired or significantly disruptive.

He said: “This measure would have been cost neutral.”

Along with finding that the school discriminated against the girl on the grounds of disability, Mr O’Driscoll also found that the school breached its obligation to the girl by curtailing her opportunity to fully access and participate in education.

The school argued that it provided the best educational service available to the girl in light of the resources that were available to it.

The school principal – now retired – told the hearing that the “learning space” could not be described as a corridor because the door in the vicinity is no longer used.

He said that he took maths class in the area in the past and described it as very bright and very comfortable.

The school principal felt that it was appropriate for the girl to be in the “learning space” because she could be very vocal.

He said this space allowed her scope to move around, and it would improve her gross motor skills.

The school principal accepted that the idea of the “learning space” was acted upon without consultation with the parents. He also accepted that no student, other than the girl, had a timetable to be there.

The principal took no external advice from DSI because he believed both he and the teaching staff were professionally competent to deal with the needs of the girl.

When put to the principal that the SNA was not supposed to teach the girl, he said the primary purpose of the SNA was to cater for the care needs of a pupil but that in reality SNA’s go way beyond what was written down in their job specification.

He accepted that the class teacher has the primary role of teaching.

When it was put to the principal to explain evidence that showed that the girl was spending only 45 minutes in class and two hours 45 minutes with the SNA, he reiterated that they were the professionals onsite and believed that the allocation of time was worked out in line with the needs of the girl as they saw it.