Signage on safe access zones should be required at abortion clinics, gardaí say 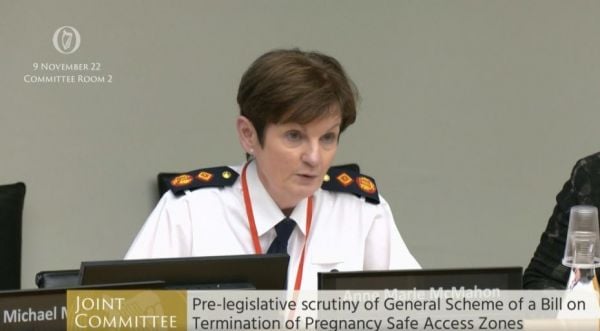 Gardaí have called for signage to be placed at safe access zones outside abortion facilities so people and officers know when an infringement is taking place.

Garda Deputy Commissioner Anne Marie McMahon said there should be no ambiguity about where a safe access zone begins and ends.

She told the Oireachtas Health Committee on Wednesday there is a lack of “practical” clarity on the 100-metre zones outside abortion facilities.

She said there is an issue with the practicalities of the locations as there are different entry and exit points to facilities.

The committee is continuing its discussion on the Health (Termination of Pregnancy Services (Safe Access Zones)) Bill 2022.

The proposed legislation would create an exclusion zone around facilities or buildings that provide abortion services, including maternity hospitals and GP clinics.

Ms McMahon told the committee: “An Garda Síochána would request that consideration is given to the provision of a general or crowd warning, by way of signage or announcement by loud hailers.”

She said the process needs to manage two competing rights – the right to protest and the right to access to abortion services.

“We have to respect both, so it’s really important that both sides know when an infringement is taking place and, equally, when a party should and could and is entitled to expect that free access zone,” Ms McMahon added.

“It’s about being clear, so that we can be fair with everybody and that there is no ambiguity around where that zone begins and ends.

“It’s really important that everybody is clear in terms of what the parameters are, and when those parameters are infringed, regardless of what perspective you’re coming from.

“It is the practicalities of these [services] locations because they are not universal in how they’re constructed. There’s different egress and access areas. They could be in the middle of a shopping complex, there could be other services there.

“There are all sorts of complexities around the practical application of this. That’s where the tensions will arise.

“The signage is one that we certainly have discussed that perhaps would help in terms of what a safe access zone is, but there may be unintended consequences in doing that as well.”

Gardaí have been called to various protests and demonstrations at premises which provide abortion services.

The committee was told no arrests have been made at the protests.

Sinn Féin health spokesman David Cullinane raised the issue of warnings given to protesters outside facilities.

Any person found taking part in a protest or demonstration in a safe access zone will be issued with a warning by gardaí and told to leave the area.

Mr Cullinane said a garda record of warnings will make it easier to manage “serial offenders” who attend multiple locations.

“In the absence of record keeping, people could just move on from one healthcare facility to the other, getting warnings in each one,” Mr Cullinane said.

“There’s nothing really that the guards can do about it, if it’s the case that you have to issue a fresh warning for each and every healthcare facility.

“Whereas if the warnings are consistent across all of the facilities, no matter which one you’re at, then that can be tracked by records that are kept. I would imagine from a policing perspective, that would be more beneficial.”

Kate Mulkerrins, executive director of legal and compliance with An Garda Síochána, said intent is key to the offence.

She said people moving in large numbers, the inability to take names and addresses and no signage will be “problematic” for gardaí.