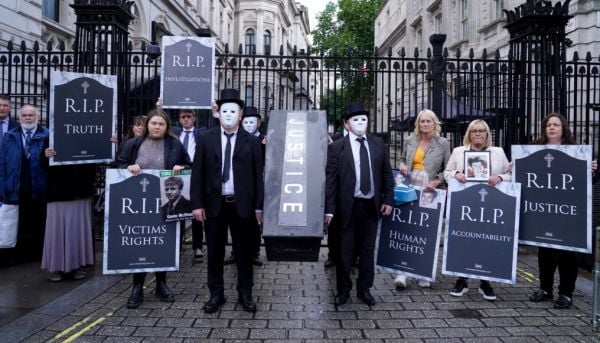 Amnesty International has urged the Government to take a case to the European Court of Human Rights if the UK’s Troubles legacy bill becomes law.

The Northern Ireland Troubles (Legacy and Reconciliation) Bill, which is going through its parliamentary stages in the UK, would prohibit future civil cases and inquests related to Troubles crimes.

The draft legislation would also see a form of immunity offered to those suspected of killings during the conflict if they agree to co-operate with a new truth recovery body.

It has been almost universally opposed by parties across the political divide in the North, as well as all victims groups.

Speaking to an Oireachtas joint committee on the Good Friday Agreement, Grainne Teggart, from Amnesty International, said that the bill “cannot be amended to be human rights compliant”.

She added: “We do not see this as a bill which can be fixed, therefore, Amnesty calls for the Northern Ireland Troubles Bill to be dropped entirely.

“We view the Troubles Bill as a cruel betrayal of victims and one which very clearly sacrifices their rights in favour of shielding perpetrators of serious human rights violations, such as murder and torture.”

She said that the provisions of the bill was a “de facto amnesty” which would set a “damaging” precedent internationally by handing powers to governments to limit accountability for human rights violations.

“Therefore, we urge the Irish government to commit to take in an interstate case to the European Court of Human Rights if this bill becomes law,” she added.

Ms Teggart said she had raised the need for an interstate challenge against the bill with officials from the Department of Foreign Affairs on several occasions.

She added: “This isn’t without precedent, we’ve seen this previously in relation to torture.

“But of course, even now, it’s not too late for Rishi Sunak to do the right thing and vindicate rights rather than remove them and scrap the Troubles Bill.”

She added it was of concern that there was no sign of the UK government pulling back from the bill, or pausing the process to get the legislation passed.

Ms Teggart made the comments before two victims of the Troubles addressed the committee about the legacy bill and accessing justice.

“People who kill are obviously subject to the law, or should be,” Mr O’Hare told the committee, after becoming visibly upset in retelling what had happened to his sister.

“Personally, I think we have to use every angle possible to object and stop this bill going through because it’s just not right.

“I’d like to hope sincerely that the Irish government will do everything in its power to challenge the bill at every opportunity.”

Eugene Reavey, whose three brothers were shot and killed by members of the UVF in 1976, said he hoped that the Irish government would stand by its citizens in Northern Ireland.