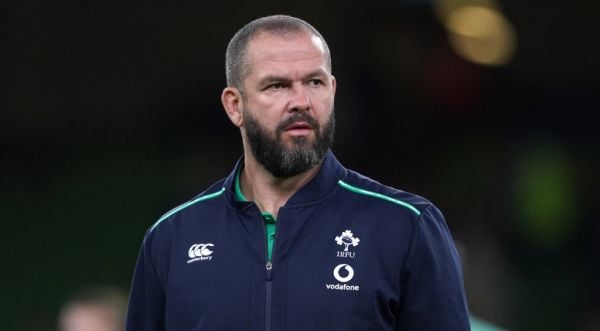 Andy Farrell revealed he is counting the cost of Ireland’s bruising victory over world champions South Africa after omitting a host of big names from his squad for Saturday’s clash with Fiji.

Head coach Farrell has made a total of nine personnel changes to his starting XV for the Fijians’ visit to Dublin, including handing a debut to Munster prop Jeremy Loughman.

While his rotated selection initially appeared to be an attempt to rest key performers and give peripheral players a chance ahead of an autumn finale against Australia, the Englishman insisted his hand has been forced by injuries.

Yet he believes the unfortunate situation could serve as important preparation for a shot at World Cup glory next year in France.

Asked how many of the absentees had fitness issues, he replied: “Most of them – they’re all injured.

“Johnny, he’s banged up with a bad dead leg, Josh has got something going on there, so has James Ryan, Hugo is banged up, Ports is banged up.

“It is what it is and this type of thing is going to happen constantly, certainly within a World Cup period, certainly when you get down to games three, four, hopefully five, six. It’s good for us.

“Most of them have done nothing this week. They’re in the rehab and physio rooms so we’ll see how they pull up next week.”

Ahead of Ireland’s team announcement, scrum-half Conor Murray was the only player confirmed to be out due to an injury sustained against the Springboks, having left the field on the occasion of his 100th cap because of a groin issue.

Your Ireland line up to face Fiji at a sold-out Aviva Stadium! ✊#TeamOfUs | #IREvFIJI

Sexton received on-field treatment for his leg problem, with his absence becoming apparent on Wednesday afternoon when Tadhg Furlong was named as Ireland captain for the first time.

Prop Furlong (jarred ankle) has himself recovered from injury to retain his place, as has centre Stuart McCloskey (arm).

Ireland’s altered line-up includes another opportunity for Joey Carbery to fill Sexton’s shoes at fly-half, while Jimmy O’Brien starts at full-back following an impressive debut cameo deputising in midfield for the stricken McCloskey.

Farrell played down concerns about a lack of competition for Keenan in the number 15 jersey, referencing Michael Lowry, Jacob Stockdale and Mack Hansen as other potential options as he encouraged O’Brien to stake a claim.

“There are plenty of options for us but Hugo with his consistently high performances has deserved to own the shirt,” said Farrell.

“It’s in somebody else’s hands this week to show that they’re another option.

“It’s good for us to find another option going forward or not. He deserves a chance. His skillset is certainly suited to that.”

In addition to Test newcomer Loughman being named in the front row, Munster fly-half Jack Crowley and Connacht forward Cian Prendergast could make debuts from the bench.