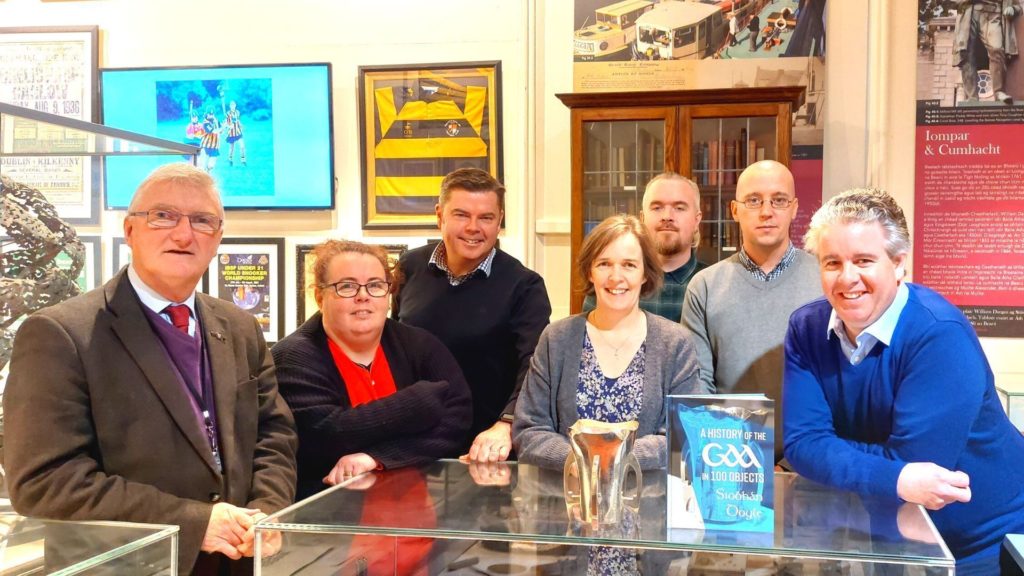 Staff from Carlow County Museum and Tourist Office pictured with the Haughney Cup, which is featured on the front cover of the book A History of the GAA in 100 objects by Siobhan Doyle and housed in the museum

A NEWLY-published book, A history of the GAA in 100 objects by Siobhan Doyle, features two Carlow objects, including the beautiful Haughney Cup that’s used on its front cover.

The book has been attracting lots of interest, including a feature on The Late Late Show, while it’s also been shortlisted for the Sports Book of the Year in the upcoming Irish Book Awards

Siobhan Doyle from Co Wexford travelled all over the country to compile a list of 100 objects to tell a history of the GAA. The book assembled a range of objects from every county in Ireland, as well as overseas, to present a chronological history of the GAA that also functions as a social history of the people who have been involved in it. Siobhan visited Carlow County Museum and included two objects from its displays in the book.

The first object is the beautiful Haughney Cup, which the museum is thrilled to see being used on the front cover of the book. The cup is displayed by the museum courtesy of the Carlow County GAA Board, to which it was presented in 1922 by Michael Governey, chairperson of the Carlow Urban District Council.

The Haughney Cup is named after Denis ‘Buller’ Haughney, who tragically died on 27 June 1922 from injuries sustained during a Carlow championship match while playing for Graiguecullen GAA against Palatine GAA two days earlier.

In October 1922, Michael Governey, well-known businessman and politician, presented the beautiful Haughney Cup to the county board. It became the Carlow Senior Football Championship trophy until 1953, when Ballymurphy lifted the trophy for the last time. It was replaced by the Fr Lalor Cup, which is also on display in the museum. Siobhan explains that she chose this item because ‘the Haughney Cup sheds light on a little-known GAA story, but one that is unfortunately familiar to many clubs and counties around the country. Named in memory of Denis Haughney, a player who died young and on the field of play, the cup is more than just a prize to be won. It is an honour to win a trophy that has such meaning behind it, and it must have especially been an honour for Denis’s own club, Graiguecullen, to win it for the first time’.

The second item featured in 100 objects is from 1944 – Co Carlow’s golden era of football – with the unofficial match day programme from the All-Ireland football semi-final played in Croke Park on Sunday 27 August, when Carlow as Leinster champions played against Kerry, the Munster champions. The attendance at the game was 40,727, a new record for a semi-final match. Kerry won by 3-3 to Carlow’s 0-10. The museum displays both official and unofficial programmes from that game.

Today, unofficial programmes are not sold, but in the early-to-mid-20th century they were on sale further away from the grounds before supporters got to where the official programmes were being sold. In this case, to have both is quite rare because, on the night of the match, Carlow supporters travelled home in heavy rain, so many of the programmes didn’t survive the long cycle home!

Siobhan stated that her fascination with the unofficial programme is that it ‘is only one sheet of paper, but one that has a story with many layers. It tells the story of Carlow senior football’s most successful championship season and also sheds light on how match-day programmes have developed since’.

A history of the GAA in 100 objects by Siobhan Doyle is out now, while both the Haughney Cup and the Carlow v Kerry 1944 match programme can be viewed free of charge in Carlow County Museum.