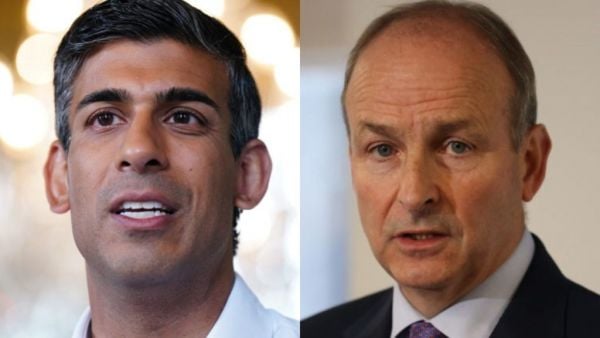 Rishi Sunak will become the first British prime minister in 15 years to attend the British-Irish Council summit on Thursday and meet with the Taoiseach as he bids to rebuild relations.

Sunak, who took office just over two weeks ago, will meet with Micheál Martin ahead of the summit in Blackpool in northwest England, as well as Scottish first minister Nicola Sturgeon and Welsh first minister Mark Drakeford.

Sturgeon, who wants to hold a second Scottish independence referendum next year, had criticised Sunak’s predecessor, Liz Truss, for failing to even call her during her tumultuous seven weeks as prime minister.

The British-Irish Council was established as part of the Good Friday Agreement to promote cooperation between the Republic and the United Kingdom.

The summits, which take place twice a year, are normally attended by the Taoiseach and first ministers of Scotland, Wales and Northern Ireland. No British prime minister has attended since 2007.

“We face huge challenges from global economic headwinds to war in Europe. So let’s be pragmatic. Let’s work together in our shared interests,” Sunak is due to say at the opening of the summit, according to advance extracts provided by his office.

“Let’s deliver for all our people across these great islands – and build a future defined not by division, but by unity and hope.”

Sinn Féin vice president Michelle O’Neill, who cannot attend proceedings due to the crisis at Stormont, said the summit represented a “test” for Mr Sunak.

“We’re aware that both the British prime minister Rishi Sunak and the Taoiseach Micheál Martin will be there together,” she said.

In advance of the summit the Taoiseach will travel first to Manchester and meet with the Mayor of Liverpool City Region Steve Rotherham, and Manchester Greater Authority Mayor Andy Burnham.

He will also review a showcase of Irish companies active in the region, supported by Enterprise Ireland, before attending a community reception.

In the margins of the summit, Sunak will meet with the heads of the devolved governments to update them on work ahead of his government’s November 17th fiscal statement, in which the UK is expected to lay out spending cuts and tax rises to fill a £50 billion (€56 billion) hole in public finances.

Sunak will also reiterate his commitment to restoring the Northern Ireland Executive, a day after the British government pushed back a deadline to hold a new election in the region.