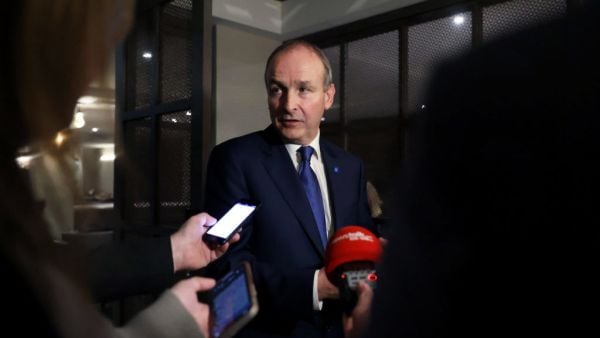 The Irish Government wants “meat on the bone” to resolve the Northern Ireland Protocol issues, the Taoiseach has said.

Taoiseach Micheal Martin said the mood music is improving but it needed to be harnessed to translate into a resolution to the impasse.

The Fianna Fail leader added that he and British Prime Minister Rishi Sunak agreed there is a “window of opportunity” to address the protocol concerns.

Mr Martin made the remarks after a meeting with Mr Sunak at the British-Irish Council summit in Blackpool on Thursday.

“From the Government-to-Government perspective we want to see meat on the bone,” Mr Martin said.

“The mood music is improving, we now need to translate that into a resolution, a negotiated resolution between the United Kingdom and the European Union.”

He added: “There is now a very good window of opportunity here to get this issue resolved.

“I think all of us agreed to remain focused on this issue with the European Union to have a negotiated resolution of the issues.

“It’s very clear to me that the Prime Minister desires a negotiated resolution.”

He added: “That, in turn, would facilitate stability in terms of the political situation in Northern Ireland, the restoration of the Executive and the Assembly.”

Mr Martin described Mr Sunak’s decision to attend the summit as “significant”, adding that his attendance had been “well received”.

“He took the earliest opportunity to engage with me and we appreciate that,” the Taoiseach said.

“I think it also gives strength to the British-Irish Council which is a key part of the Good Friday Agreement.”