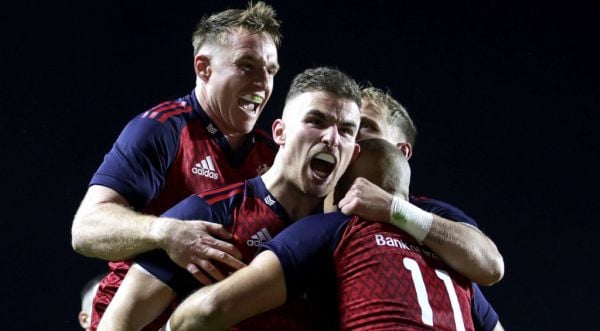 Munster have defeated South Africa A, triumphing 28-14 in their clash at Páirc Uí Chaoimh on Thursday evening.

It is the first time Munster have defeated a touring South African side.

Munster raced to a 21-7 lead at half-time, with tries from Shane Daly, Simon Zebo and Diarmuid Barrion.

Mike Haley added another after the break, and the home side looked to be in total control of proceedings.

South Africa set up a nervy finish, however, with Sikhumbuzo Notshe going over to keep the pressure on with Munster down to 14 men.

In front of a record 41,000-plus crowd, Munster held on to see out the famous victory.

A huge thanks to the record crowd of 41,400 for roaring us to victory on a brilliant night ♥️#MUNvSAA #MunsterInThePáirc #SUAF 🔴 pic.twitter.com/LgWbqnM7oK

Munster had deserved their 21-7 half-time lead, forged in the midst of a downpour that had not undermined the quality of the contest. The Reds’ defensive stand on the stroke of half-time as the South Africans mauled, mauled and mauled again from five metres out without success was every bit as significant as the three tries scored at the opposite end and celebrated with as much gusto by the huge banks of supporters behind each set of posts.

If this was to be the launchpad for the Rowntree era and the reference point for the province’s newest generation of players that the new head coach craved, then the opening 40 minutes delivered in spades as the growing pains of the first seven URC games were left behind.

First blood was drawn inside two minutes, as the home side won the first psychological battle by forcing the first error following an opening period of kick tennis, South African full-back Aphelele Fassi hooking his return from Healy’s serve to hand Munster a lineout in the tourists’ half.

Too often in those opening weeks, promising positions had been wasted by a combination of sloppy execution, poor decision-making and slapdash handling but not on this special night.

The lineout was effective and the men in red struck by moving left to right at speed, Antoine Frisch’s deft offload in midfield on his first Munster start finding full-back Mike Haley whose pass to right wing Daly allowed the Corkman to get his team off to a dream start with the opening try. Ben Healy kicked the conversion and Munster were up and running at 7-0 inside three minutes.

Congratulations to tonight’s @Pinergy Player of the Match, Paddy Patterson 🙌

When Fassi made amends for his earlier error in the right-hand corner 10 minutes later in their first foray into the Munster 22, there was sense of normal service resumed as Johan Goosen converted. But Munster stuck to their gameplan and worked their way back into the lead, slowly turning the screw at the breakdown and gaining valuable territory through penalties. They eventually got to South Africa’s five-metre line from where the ball was moved from right to left by the heavy brigade before the backs took over, inside centre Rory Scannell finding Healy, whose long pass to the left wing found Zebo in space to score on 29 minutes.

Healy again converted for the touchline and he would add another two points before the interval as Munster struck through their maul, Barron’s finish striking another blow to the Springbok hopefuls’ morale.

It got better after the break, Haley chasing on to a bouncing Healy grubber kick through the South African A line that the fly-half converted to open a 21-point lead on 43 minutes at 28-7.

Four tries to one up with most of the second half remaining, it was inevitable that Munster would have some defending to do and South Africa twice had tries struck off, one for a foot in touch, the other for a knock on from replacement back-rower Sikhumbuzo Notshe before he eventually added to the tourists tally from short range, Munster’s substitute prop Liam O’Connor earning his side a yellow card in the process.

That might have prompted an air of desperation around the Pairc with the lead reduced to 28-14 but Munster otherwise dealt comfortably with the situation, though Haley came to his side’s rescue to claim a loose ball in front of the posts with the South African players bearing down on him. It closed out the sin-bin period but there was still work to be done, the Munster pack eliciting another roar from around the cauldon as they thwarted the South Africans again, this time at the scrum with a hard-earned set-piece penalty.