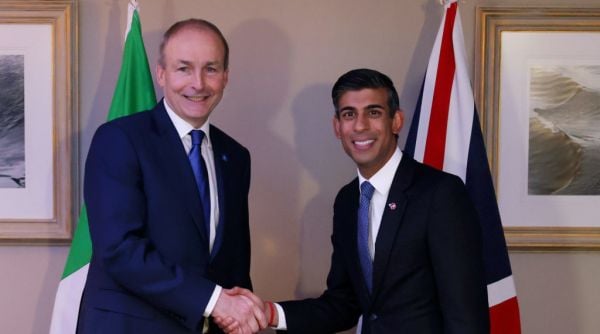 British Prime Minister Rishi Sunak has said he is “confident” of a negotiated solution being found to the Northern Ireland Protocol issues.

Mr Sunak said “goodwill and pragmatism” would be needed but that a way through should be found.

He added that he wanted a resolution to be found to allow the powersharing institutions at Stormont to be restored.

Mr Sunak was speaking after his first official meeting with Taoiseach Micheál Martin at the British-Irish Council summit in Blackpool.

Mr Sunak, who is the first prime minister to attend the summit in 15 years, described his meeting with Mr Martin as “very positive”.

The Taoiseach said he welcomed the opportunity Mr Sunak so soon after his appointment. “It clearly demonstrates the importance of the relationship between Ireland and Britain.

“People and businesses in Northern Ireland have been crystal clear that they want agreed solutions to the Protocol issues and now is the time to do so.

“I hope this can be achieved and that progress can be made on re-storing the NI Executive and all of the Institutions of the Good Friday Agreement.”

On Northern Ireland, the Taoiseach also pointed to the significance of the upcoming 25th anniversary of the Good Friday Agreement in April 2023.

The summit comes after Northern Ireland Secretary Chris Heaton-Harris announced plans to extend a deadline for calling a Stormont election and cut the pay of Assembly members, amid continuing political deadlock in the region.

“We need to find a practical resolution to some of the challenges that families and businesses are facing on the ground,” Mr Sunak said.

PM @RishiSunak has first official meeting with the Taoiseach @MichealMartinTD at the British-Irish Council in Blackpool, opening a new chapter in Anglo-Irish relations. More @PA pic.twitter.com/tPT9QKpyma

“We need to protect Northern Ireland’s place in the United Kingdom.

“And that will require everyone to enter into these talks with a spirit of goodwill and pragmatism.

“I’m confident if we can do that, working together, we can find a way through.”

Mr Sunak described the protocol as “threatening” Northern Ireland’s place in the United Kingdom, adding he wanted to “resolve” that.

Delighted to visit Manchester to meet the Irish community, and hear from some of the innovative firms working with @Entirl.

The ties with Ireland are strong, from family to football, values and trade – and we’re determined to strengthen those bonds into the future. pic.twitter.com/vaDidpyJPU

“I discussed this with the Taoiseach, we had a very positive meeting.

“And what I want to do is find a negotiated solution preferably, and I’m pleased with the progress that we’re making in these early days in this job, and my focus is to try and find a resolution here, get the institutions back up and running.

“That’s how we’re going to deliver for the people in Northern Ireland.”

Negotiations between the UK and EU aimed at securing changes to the protocol are continuing, with both sides talking up the prospect of a deal.

The DUP has made clear it will not countenance a return to powersharing until the protocol’s economic barriers on trade between Great Britain and Northern Ireland are scrapped.