Singling out DUP MLAs for pay cut would be legally challenged, claims Heaton-Harris 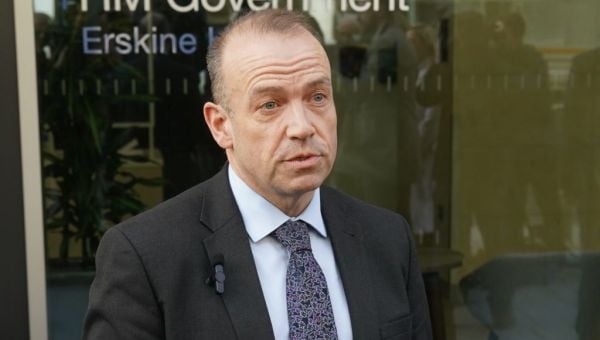 The Northern Ireland Secretary Chris Heaton-Harris has insisted that cutting the pay of all Stormont MLAs, rather than singling out the DUP members boycotting devolution, is “fair and proportionate”.

Sinn Féin vice president Michelle O’Neill has challenged Mr Heaton-Harris on the universal nature of the 27.5 per cent salary reduction for members of the crisis-hit Assembly in Belfast.

The powersharing institutions are in cold storage due to the ongoing DUP block on devolution in protest at Brexit’s Northern Ireland Protocol.

Later on Thursday, the protocol is set to dominate discussions between Taioseach Micheál Martin and Britain’s Prime Minister Rishi Sunak when they attend the biannual British-Irish Council (BIC) summit, which is being held in Blackpool.

Mr Sunak, who is the first UK prime minister to attend the summit in 15 years, will state that he is “determined” to restore powersharing in Northern Ireland as soon as possible.

The MLA pay cut was one of several moves announced by Mr Heaton-Harris on Wednesday in response to the devolution impasse.

Salaries of all Assembly members were cut by a similar proportion during the last powersharing collapse at Stormont – an implosion triggered in 2017 when Sinn Féin brought down the ministerial Executive.

Mr Heaton-Harris said singling out DUP MLAs would be open to legal challenge.

“There has been legal opinion taken in the past by former secretaries of state that demonstrate it would be unbelievably difficult and judicially reviewed,” he told BBC Radio Ulster.

“I’d be judicially reviewed if I didn’t do it in a fair and proportionate way, which is what this is.”

While no definitive date for the pay cut has been announced, the Northern Secretary has indicated it could come into effect in early December.

Ms O’Neill had questioned why all MLAs were being targeted.

“I think it would have been more effective to target that towards those people that are actually failing to turn up,” she told reporters at Stormont on Wednesday.

The DUP has rejected her contention, highlighting that the pay cut was universal when Sinn Féin pulled down the Executive.

Senior DUP member Gordon Lyons said: “I think it should be the same for everybody. We’re all being prevented from going back in because of the instability that the protocol is causing right now.”

He told BBC Radio Ulster: “I noted what Michelle O’Neill had said yesterday, that she believes that it’s only the DUP salaries that should be cut again.

“First of all, it’s not going to change our position because our position has not come about based on the salaries that we are getting. But, secondly, for three years Sinn Féin prevented Stormont from meeting – for 1,044 days they didn’t allow the Assembly to meet – so I’d be very interested to know if Michelle O’Neill is going to write a cheque and give it back for the years that Sinn Féin MLAs didn’t sit.”

Today I have announced plans to extend the period for Executive formation and take powers to reduce MLA salaries as appropriate. (1/3) pic.twitter.com/SJl7qSGYrG

On Wednesday, Mr Heaton-Harris also extended a deadline for forming a new Executive.

Existing legislation gave the Stormont parties almost six months to form a ministerial administration following the last election in May, which saw Sinn Féin emerge as the largest party for the first time.

When the original deadline to establish a new Executive lapsed on October 28, the Government assumed a legal responsibility to hold a fresh poll within 12 weeks.

Mr Heaton-Harris has now extended the deadline for parties to form an Executive by six weeks to December 8th, with the option of a further six-week extension.

With the Stormont deadlock intrinsically linked to the dispute over the protocol, the Government move is designed to provide more space for a deal to be struck between Brussels and London over the contentious Irish Sea trading arrangements.

The 12-week clock for calling an election will now come into effect either on December 8th – meaning a poll would have to be held by March 2nd – or six weeks later, on January 19th, meaning an election would need to take place by April 13th at the latest.

“Everybody in the European Commission, the UK Government, Irish Government, people in Northern Ireland, everybody realises it’s a problem that needs to be solved.

“It needs to be solved by an honest understanding and respect and trust on both sides.

“We have that, and now not having the elections in this calendar year has cleared some space for talks.”

He is also giving extra powers to Stormont civil servants to enable them to run the region’s rudderless public services and will take steps to pass a budget for the region.

The moves will require legislation to be laid and passed at Westminster.

The DUP has made clear it will not countenance a return to powersharing until the protocol’s economic barriers on trade between Great Britain and Northern Ireland are scrapped.

Negotiations between the UK and EU aimed at securing changes to the protocol are continuing, with both sides talking up the prospect of a deal.

The two governments are both keen to avoid a scenario where Stormont remains in limbo next April when the 25th anniversary of the historic Good Friday peace agreement will be marked.