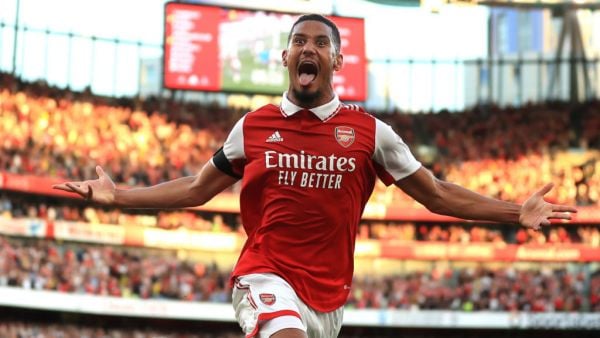 William Saliba is aiming to follow in the footsteps of Patrick Vieira and Emmanuel Petit by becoming the latest Arsenal player to win the World Cup with France.

The 21-year-old was called up as part of France’s 25-man squad which will travel to Qatar next week looking to retain the trophy they lifted for a second time in 2018.

Saliba revealed he discovered he had been called up for the finals just moments before the warm-up ahead of Arsenal’s 3-1 Carabao Cup third-round defeat to Brighton on Wednesday night.

He already has seven senior caps, making his debut earlier this year while on loan at Marseille and continuing to impress having finally broken into the Arsenal side at the start of the season.

It was France’s first World Cup win in 1998 which saw Petit score and Vieira run the midfield as the hosts beat Brazil in the final.

Saliba’s earliest World Cup memories come some eight years later but he is still keen to become the next Arsenal player to bring home a winners’ medal.

Asked about that history, Saliba replied: “Yes, of course, I want to be the next Frenchmen to do that, like Petit or Vieira. We will see.

“You know in France we have a lot of good defenders so that is why I am so happy. If I am in the squad it’s because I had a good start to the season with Arsenal. I am so happy and grateful to be in this squad.”

Saliba was the only player to retain his place from the weekend Premier League win at Chelsea as manager Mikel Arteta rotated heavily against Brighton.

Eddie Nketiah’s opener for the Gunners was cancelled out by a Danny Welbeck penalty before Kaoru Mitoma and Tariq Lamptey completed the comeback.

“Some people told me just one hour before, but I waited for the coach (Didier Deschamps). So when the coach told the media I was so happy. It was just before the game. I was so happy,” he added.

“When he (Deschamps) spoke on the TV we were in the warm-up. So when I came back I watched it a little bit on my phone and I saw my name. I was so happy.

“It is amazing. I don’t think I can imagine what is the World Cup now, but I will imagine it later.”

Saliba played an hour as Arsenal lost for just the third time this season in all competitions.

Brighton showed as many as eight alterations of their own from their win at Wolves as manager Roberto De Zerbi handed a number of young players the opportunity to impress.

“He’s giving opportunities to the younger guys and at the same time he is very demanding.

“It’s clear what he wants us to do on the pitch, but he gives the young guys the confidence to keep pushing for a place in the starting XI in the Premier League.”