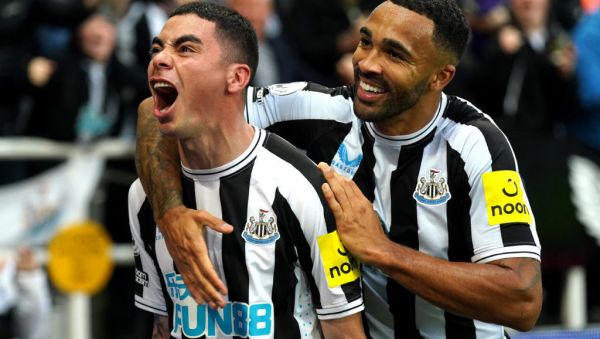 The 28-year-old Paraguay international has found the back of the net seven times in his last seven league games, often in spectacular style, to belatedly announce himself as a threat in English football.

Here, the PA news agency takes a look at the former Atlanta United star, who on Friday claimed the top flight’s Player and Goal of the Month awards for October, and how he compares to the men with whom he is currently keeping company.

The passion.
The relief.
The euphoria.

Signed by Rafael Benitez in January 2019, Almiron arrived from Major League Soccer with an impressive reputation, but something to prove in the white heat of the Premier League. His all-action approach won him instant admiration, but tangible results – goals and assists – eluded him initially. Indeed, his first goal, a winner against Crystal Palace in December 2019, did not arrive until his 27th league appearance.

The South American’s perceived lack of end-product led to criticism in some circles, but none more high-profile than that offered by Manchester City star Jack Grealish, who famously poked fun at team-mate Riyad Mahrez for having “played like Almiron” in an unguarded end-of-season comment. In the months since, Almiron has scored eight goals, matching his best total for a season in England; Grealish has managed just one.

On a similar theme, Almiron has finally started to pay off his £21million transfer fee in the hard currency of goals. His recent purple patch means each of his 17 Premier League strikes to date over 124 appearances has cost £1.24million. At £100million, Grealish is Manchester City’s record signing. His four league goals in 34 appearances have come at an average cost of £25million.

Since October 1, Almiron has averaged a league goal every 91 minutes, a rate bettered only by Manchester City duo Erling Haaland and Phil Foden among players with in excess of 300 minutes under their belts. He is one of only three players – the others are Haaland and Harry Kane – to have scored seven or more goals in seven games this season.

The Paraguayan’s return of seven in seven compares favourably to Haaland’s nine over the same period, while Kane has 11 in his last 12, Aleksandar Mitrovic nine in his last 12 and Ivan Toney had six in eight before embarking on a barren three-game run. However, Almiron is the only member of the quartet who does not take penalties for his club.