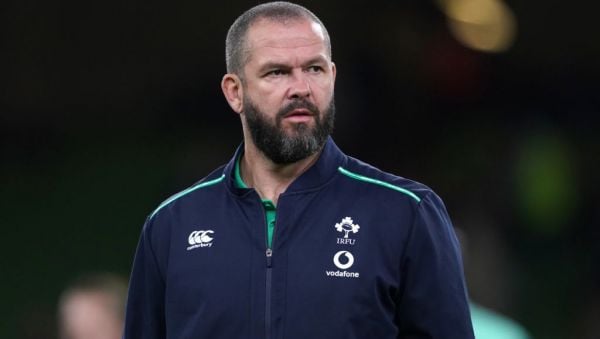 Andy Farrell warned that Test caps “are not gimmes” as he admitted underwhelming second-team performances had cost some of Ireland’s fringe players a place in his squad to face Fiji.

Head coach Farrell has promoted only two of the players who featured in Ireland A’s resounding 47-19 defeat to an All Blacks XV to his starting line-up for Saturday’s match in Dublin.

That is despite a mini injury crisis in the wake of last weekend’s Autumn Nations Series win over world champions South Africa which has deprived him of a host of star names.

Munster prop Jeremy Loughman and Ulster back-rower Nick Timoney are the international rookies given the nod, while a further five of the Ireland A side – Tom O’Toole, Cian Prendergast, Max Deegan, Craig Casey and Jack Crowley – may have opportunities from the bench.

Farrell had always planned to retain an experienced core against the Flying Fijians but said last Friday’s second-string game had impacted his selection and stressed sub-par displays will not be tolerated.

“There’s a bit of both in that,” he said. “Test matches are not gimmes, certainly at this stage. Test matches have to be earned.

“Of course, there are certain circumstances with injuries and opportunities and being in the right place at the right time, and getting your run right.

“But people don’t just get a Test match when they’re not performing at their best. There is definitely an element of that.”

Farrell has made a total of nine personnel changes to the team which began against the Springboks.

Johnny Sexton, James Ryan, Conor Murray, Andrew Porter, Peter O’Mahony, Josh Van Der Flier and Hugo Keenan have each dropped out of his squad amid a host of injury issues which could yet have ramifications for next weekend’s autumn finale against Australia.

Dave Heffernan, Jacob Stockdale, Michael Lowry, James Hume and Gavin Coombes appear to be the most pointed exclusions from the Ireland A side.

Loughman will become the 27th Test debutant during Farrell’s tenure, with uncapped replacements Prendergast and Crowley likely to push that figure to 29.

Despite his willingness to give opportunities, the Englishman insists there can be no cheap caps and players have to seize chances to impress.

“It’s a must,” he said. “You could talk about that there’s only so many Test matches until whenever, but at the same time, we’ve had a few opportunities, you know?

“Three with the Emerging Ireland, two with the Maoris and the A game. They matter to us.

“We see them performing day-in, day-out against each other which in some circumstances, like I’ve said before, is more difficult because of peer pressure etcetera.

“They are getting judged consistently on that. Opportunity comes around and you’ve got to take it. And some lads, we are interested to see how they handle that this week.”

America-born Loughman has a Test opportunity having featured against the Maori All Blacks in the summer.

“The potential of the all-round game is there for Jeremy,” said Farrell. “He’s consistently getting better within his performance.

“His skill-set has always shown in patches and I think the tour to New Zealand was fantastic for him – mixing with the experience of Cian (Healy) and Tadhg (Furlong), just seeing how they go about their work on a daily basis has brought him on no end.

“He’s got good hands, he’s got good feel, good awareness. He’s powerful, unbelievably powerful. His scrummaging has come on no end over the last six months and he’s a lot of power.

“And he could add to our game, you know? He gets his opportunity to show that.”