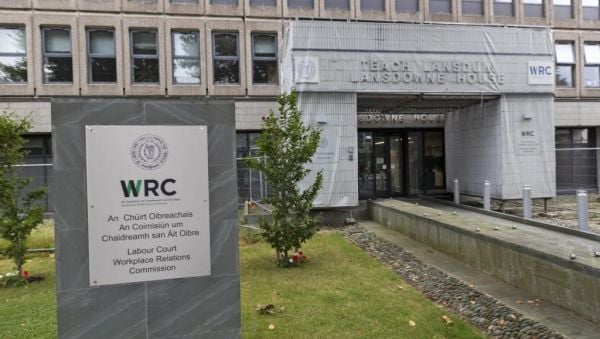 A Kilkenny hotel has been ordered to pay €5,000 compensation to a blind woman for discriminating against her when refusing to accept a room booking that included her guide dog.

In the case, Workplace Relations Commission (WRC) Adjudicator, Andrew Heavey has ordered Kilkenny House Hotel to pay Pamela McKeogh €5,000 for discriminating against her on the disability ground under the Equal Status Act when refusing to accept the room booking that included Ms McKeogh’s guide dog.

At the WRC, Ms McKeogh’s partner, Kevin Ryan told Mr Heavey that an online hotel booking had been made for a one-night stay for November 19th, 2019 at the Kilkenny House Hotel.

Mr Ryan stated that he became aware that the hotel did not allow guide dogs on November 14th when he received a message from the hotel via the online booking agent that dogs were not allowed in the hotel and that it would not be possible to bring the guide dog.

Mr Ryan stated that he subsequently spoke to the hotel manager and during this conversation, the manager informed him that he himself had dogs and if the guide dog was present in the hotel the other dogs would “bark all night”.

Mr Ryan confirmed that the hotel manager said “he was cancelling the booking and didn’t want to hear any more about it”.

Mr Ryan further stated that on staying in other hotels, there was never a requirement to stay in a room specifically designated for disability usage as the guide dog is highly trained and sits and sleeps on a special mat and does not move from that mat.

Mr Ryan stated that even the suggestion of needing to use a room designated for disability usage further adds to the discrimination as it is not necessary at all for Ms McKeogh to stay in such a room.

In his findings, Mr Heavey stated that while the hotel stated that it did allow guide dogs but that there were no rooms available on the night in question “I do not accept this contention as the message sent the day after the booking was made is quite clear and unambiguous”.

Mr Heavey said that he also noted from Mr Ryan’s submission that the hotel policy on pets changed in December 2019 and that guide dogs are now accepted “although at the material time in November 2019, I am satisfied that this was not the case”.

Mr Heavey stated that he also accepted Mr Ryan’s evidence concerning his interactions with the hotel manager who told him that he himself had dogs and they would be barking all night if the guide dog was present at the hotel.

Mr Heavey said that this was explained by the hotel’s solicitor who confirmed that the manager lived adjacent to the hotel and his own dogs would be aware of the presence of the guide dog in the hotel.

Mr Heavey said that he accepted Mr Ryan’s contention that while the hotel manager may well have accepted the booking, the reality was that once the guide dog was not permitted in the hotel, it would no longer be possible for them to stay there.

Mr Heavey found that Ms McKeogh was subject to less favourable treatment as a result of her disability and the hotel failed to provide the necessary accommodation to Ms McKeogh to facilitate her stay at the hotel.

The WRC Adjudicator said that it would have been far preferable if the hotel manager to give evidence “but despite an adjournment to facilitate his attendance, regrettably the hotel manager remained unavailable to attend due to ill health”.

In correspondence with the WRC, the hotel stated that it does allow guide dogs at the hotel but that there was no such room requested by Ms McKeogh’s partner at the time of booking and on the night in question, none of those rooms were available.

The hotel added that Ms McKeogh could not have stayed with her dog in any other room as this would have required extensive cleaning following her stay.

In further correspondence, the hotel manager stated that the four bedrooms that were set aside for disability usage were not available on the day in question.

The hotel manager stated that while he did indicate that the hotel may not be suitable for a guide dog, he did not refuse to allow Ms McKeogh and her partner to stay at the hotel.

In the letter, the hotel manager further stated that he had personal experience of disability and if discrimination was perceived to have occurred in this case, he was truly sad and sorry for that perception.