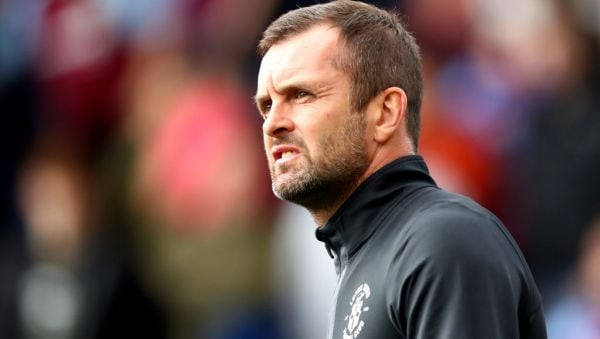 Nathan Jones insists his work at Luton gives him the confidence to succeed in the Premier League amid talk Southampton should have targeted a big-name candidate to replace Ralph Hasenhuttl.

Jones was appointed Saints manager on Thursday, signing a three-and-a-half-year contract at St Mary’s, following the sacking of Hasenhuttl earlier this week.

Southampton dropped into the relegation zone following Sunday’s 4-1 home defeat to Newcastle, and the 49-year-old Welshman is confident about turning the Saints’ fortunes around.

“We’ve got to get results, but Sport Republic (Southampton owners) look deeper than results,” Jones said ahead of his first game in charge at Liverpool on Saturday.

“They are going to dissect things, they want substance. The lure of it wasn’t just the Premier League, or that Southampton have got a fantastic stadium and a beautiful training ground.

“The lure was what Sport Republic want to build here. It’s parallel to a lot of the metrics I did at Luton, and that was the big thing for me.

“Let’s address any elephant in the room. I’m not the biggest name they could have gone for. But the substance is in the work and that’s what gave me the confidence to come here.

“They looked at a lot of people and I came out high on their list in terms of what they specifically wanted to build.

“That was the project, the lure. But, at the end of the day, you have to do good work, and if I do good work I’m sure we’ll reach our goals.”

Jones had two spells in charge of Luton, winning promotion from League Two before becoming Stoke boss in 2019.

He returned to Luton 18 months later and guided the Hatters to a sixth-placed finish in the Championship last season before they lost to Huddersfield in the play-off semi-finals.

On a weekend Jones had expected to welcome Rotherham to Kenilworth Road, he will now be heading to Anfield to play last season’s Champions League finalists.

“All I’ve done is address them and ask them for a few key things. I can’t do ground-breaking work in a day because of the game on Wednesday (Southampton beat Sheffield Wednesday in the Carabao Cup on penalties) and the amount of people who played.

“Yesterday was a recovery day and I only get today to work with them. It won’t be some sort of categorical shift in how we play, but I hope it will be an uplift in energy and that they work for the club and for me.

“Anfield is one of the toughest places in Europe to go, but what a great start. You can be scared or excited by it. You can be motivated by it, and I’m definitely one of those.”

Jones says he has had a “whirlwind week” travelling up and down the country and opened up on his family connections with Southampton at his first media conference.

His wife’s great-grandfather played for Southampton and all her family are supporters of the club.

Jones laughed: “So there’s zero pressure. My wife’s dad has already been giving me tips, so he’s been blocked. I can’t have that! But, seriously, it’s a wonderful connection for that family.”