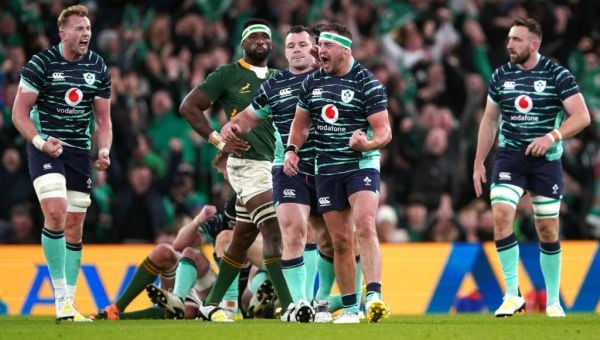 Head coach Andy Farrell has made nine personnel changes to the starting XV which toppled the Springboks, with Australia to come in a week’s time.

Here, the PA news agency picks out some of the main talking points ahead of Saturday’s clash in Dublin.

Fiji head coach Vern Cotter has played down the prospect of pulling off a shock result at the Aviva Stadium. He believes Ireland are “barely looking” at his side due to their upcoming clash with Australia and suggested the hosts will treat the Test like a “training session”. Sandwiched between meetings with the Springboks and the Wallabies, the game is undoubtedly the most straightforward of Ireland’s appointments this month. Yet it represents a different type of challenge. Fiji are likely to be far more expansive than South Africa and will look for quick ball at every opportunity, which should lead to a breathless, end-to-end affair.

Walking wounded ahead of Wallabies clash

Farrell was always likely to make changes for this game. But he revealed on Thursday that the fitness of his squad has in part forced his hand. Skipper Johnny Sexton, vice-captain James Ryan and Irish player of the year Josh Van Der Flier are among the lengthy list of absentees, with Conor Murray, Andrew Porter and Hugo Keenan also dropping out due to injuries. Ireland should have the squad strength to cope against Fiji. But Farrell also indicated his star men are not necessarily going to be ready to return for the autumn finale against Australia, which would be a far greater concern.

Despite the mini injury crisis and level of opposition, Farrell has retained an experienced core in his matchday squad. Uncapped Munster prop Jeremy Loughman has been given an opportunity to put pressure on Porter and Cian Healy at loosehead, while rookie replacements Cian Prendergast and Jack Crowley should take the number of Test debutants under Farrell to 29. Despite his propensity to bring in new blood, the Englishman reinforced his mantra of no cheap caps as he admitted the performance of some fringe players in Ireland A’s 47-19 drubbing by an All Blacks XV last Friday had impacted his selection.

The raft of changes means influential prop Tadhg Furlong will become the 109th man to captain Ireland. British and Irish Lion Furlong, who has shaken off a minor ankle issue sustained against the Springboks, is a key cog in the Irish machine and deserving of the opportunity. He responded humbly to his appointment as skipper, saying he had never dreamt of performing the role, before adding a touch of humour. Asked what he did dream of, the 29-year-old replied: “Spuds. Gravy. The mother’s Sunday roast.”

Full-back is hardly a problem position for Ireland due to Keenan’s superb form over a sustained period. But they have very little cover there and it is far from clear who is currently the first-choice deputy. With Rob Kearney retiring just before the start of his tenure, Farrell has previously given opportunities to Jordan Larmour, Jacob Stockdale and Michael Lowry at 15, while he feels wing Mack Hansen could also provide cover. Leinster’s Jimmy O’Brien gets a chance to stake his claim this weekend and will be eager to build on his impressive impromptu debut cameo in midfield against the Springboks.