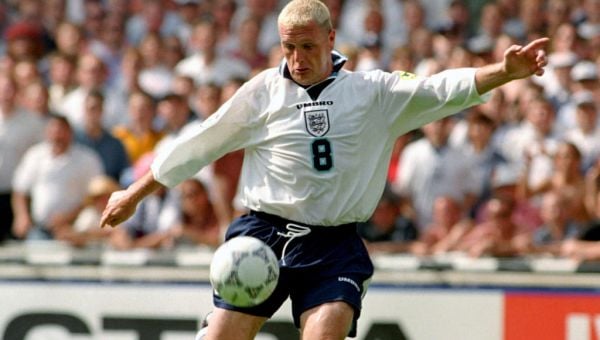 Paul Gascoigne hopes the England players will gel as a team at the World Cup – rather than just counting on one of them to make the difference in Qatar.

Gareth Southgate’s squad open their campaign against Iran and will then take on the United States before meeting Wales in the final Group B fixture.

Gascoigne reflected on his own World Cup experience 32 years ago in ‘Italia 90: Four weeks that changed the world’, which will will air on Sky Documentaries from November 13th.

Tottenham midfielder Gascoigne had never started a competitive international, so was something of a controversial selection for Sir Bobby Robson’s squad.

Gascoigne, though, took centre stage in Italy as England built momentum from a slow start to go on and reach the semi-finals, where they were beaten on penalties by West Germany in Turin.

The likes of James Maddison, Jack Grealish, Jude Bellingham, Mason Mount, Phil Foden and Bukayo Saka will all be hoping to make an impact in Qatar.

James Maddison – on the plane to the #FIFAWorldCup ✈️ pic.twitter.com/bOH7HxAjxK

Gascoigne feels it will be important how well they can all work together as a unit which will determine how far England can go.

“We have got some quality players there (in the squad), but we are talking now individual players,” Gascoigne told the PA news agency.

“Today’s teams have got a quite a few individual players, but it is whether you gel together, that is more important than anything else.

“In 1990, I was so proud of the players that didn’t play because when we scored, they were all up celebrating, there was nobody who sulked if they were not playing – some of them went there and never got a game, but they were still behind us, which is what the players are going to need more than anything.

“I was just 23 and the other players were coming into their prime, like Bryan Robson, John Barnes, Chris Waddle, Peter Beardsley, Gary Lineker, Terry Butcher, Peter Shilton, Stuart Pearce – they were unbelievable.

“So I was fortunate to be amongst all them and they just let me get on and enjoy myself, and of course Bobby Robson was a brilliant manager.”

The World Cup that changed the game forever. Through the voices of the players themselves.#Italia90 available on Sky Documentaries 13 November. pic.twitter.com/4VCwkXNoEn

As well as drawing praise for his mesmerising performances to help drive England on through the knockout stages of Italia 90, Gascoigne also captured the hearts of the nation watching back home during the semi-final.

After being shown a yellow card for a challenge which appeared to make minimal contact on Thomas Berthold, so ruling him out of the final should England have progressed, the young midfielder struggled to hold back his tears.

“Even to this day, I still don’t think I touched him,” said Gascoigne, 55.

Bobby Robson: “At the time of the booking, he was probably a bit rattled. Gary Lineker knows him well and he came over to the bench and shouted at us to watch Gazza for the next five minutes.”

“It wasn’t just the fact I was going to miss the final – I didn’t want to be selfish in that way because (in) the last 20 minutes, I gave my all.

“It was heartbreaking to get the second yellow card after going so far (in the tournament), having done so well and really enjoyed myself.

“(Everyone) saying that seeing my tears changed the game around (in England) is a nice feeling – but it was certainly a shock getting back home and seeing all the fans, when it was just ‘wow’.”

:: ‘Italia 90: Four weeks that changed the world’ will air on Sky Documentaries on November 13, 20 and 27 at 9pm, and will be available on streaming service NOW