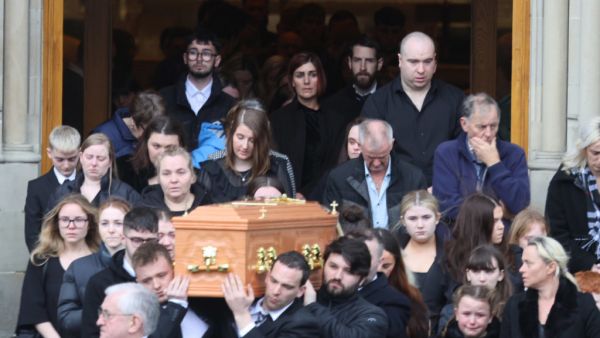 A car mad teenager tragically killed in a road crash was led to her final resting place by a fleet of cars.

Dozens of cars from the Donegal Car Club followed the cortège of Chloe Gallagher Fanneran to New Leck Cemetery in Letterkenny following her funeral mass at St Eunan’s Cathedral today.

The cars including Golfs, Lexus, Sierras and Hondas, many with stickers which read ‘Fly High Chloe’, followed the cortege through Letterkenny town.

The 18-year-old was killed following a two car collision on the outskirts of Letterkenny just before midnight on Wednesday.

Chloe was a front seat passenger in a car which struck another car on the Ramelton Road.

The teenager, from Crievesmith in Letterkenny, was pronounced dead at the scene while the two male drivers of the two cars were taken to hospital for treatment.

Gardaí carried out a forensic investigation of the scene and a cause of the crash has not yet been released.

Friends and family of the teenager led her coffin up the aisle for her funeral mass which was conducted by Fr Damien Nejad.

Among the mourners in the large congregation were Chloe’s other Michelle Fanneran, father Gerard Gallagher, sisters Keisha Gallagher, Natalia Fanneran and Holly Matthews, brothers, Ryan Fanneran and Blake Matthews, her aunties, uncles, grandparents and all her other relatives, neighbours and friends.

Also in the congregation were pupils from Scoil Mhuire gan Smal and principal, Ms Irene Simmons. Chloe had been a pupil there and her sister Natalia is still in fourth class in the school.

Fr Nejad told Chloe’s heartbroken family and friends to have hope in their hearts that they will meet Chloe again.

He said “Chloe was so young, and she had her whole life ahead of her.

“My hope for you is that, over time, you will get to a place where you have got peace in your hearts.

“I want you to have peace in your heart about Chloe and the whole situation.

And he then remembered the young woman who “lit up every room she walked into.”

He added “She was a Mammy’s girl, through and through.

“She had a heart of gold. She was stubborn but she was selfless and caring. Chloe was as sassy as they come.

“She was sarcastic to the max, in a nice way. She had the widest smile that could light up any room.

“She was a torture to her favourite neighbour Gareth, and she always kept her uncle William and Peter in line. She had an unbreakable bond with her nana Nora.

“She had many gifts and one of them was that she could make friends easily. The amount of young people at the wake showed that she was so popular.”

He said Chloe loved animals, especially her dogs Tyson and Ciara and loved nothing better than lying in her room watching movies including ‘Lilo & Stitch’ with her wee best friend Rhianna.

But cars were her thing, he added.

“She was car mad. She had a love for Lexus cars. She loved the rally weekend,” he said.

Chloe’s family and friends led her coffin from the church followed by her heartbroken parents Michelle and William and family.

Outside in the crisp November afternoon air, teary teenagers huddled in small groups, hugging and consoling each other.

She was then led to her final resting place in New Leck cemetery just a short distance from her home.