Cost-of-living protests to take place across the country today 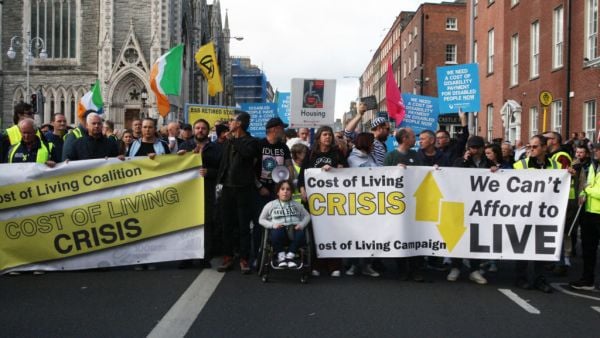 It is being organised by the cost-of-living coalition.

They say action is required to protect households from the impact of rising interest rates.

“Listen any sort of income increase from Government is always welcomed but when it comes to the double payment, a lot of people already spent the money on bills before the payment was received.”

The Cost of living coalition is made up of opposition parties such as Sinn Féin and People Before Profit, trade unions, civil society groups, students and many more local community activists.

Cost of Living Coalition national day of local protests across the country. 22 locations. @ClaireKerrane @RBoydBarrett @SparkIreland and others call on you to join your local protest.

Ms Kerrane said the main point of this weekend’s protests is to send a strong message to Government that what they have announced in relation to the budget is “not enough and not going to be enough.”

“We know that the supports that are needed are not there also” she said.

The news comes as last week the Central Statistics Office (CSO) announced prices in Ireland increased by 9.2 per cent in annual terms in October, a new blow for households grappling with a cost-of-living crisis.

It follows an annual increase of 8.2 per cent in the consumer price index in September, according to the CSO.

Prices have been rising steadily since April last year, triggering the worst cost-of-living squeeze in decades, with consumer price inflation topping 5 per cent for 13 months in a row.