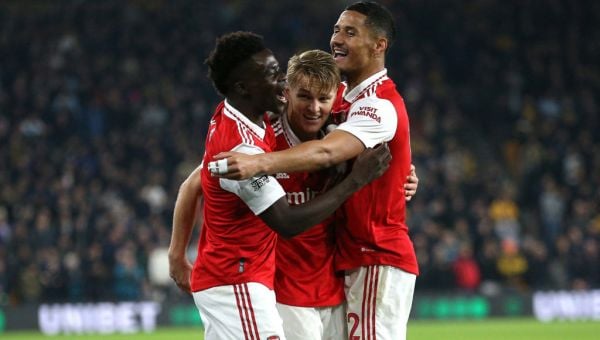 Arsenal sent out a title warning after Martin Odegaard’s double sent them five points clear at the top of the Premier League.

The captain’s second-half brace earned a 2-0 win at Wolves and showed Manchester City their crown is under threat.

Mikel Arteta’s side are genuine contenders, grinding out a victory to put daylight between them and the reigning champions.

They seized on City’s 2-1 defeat to Brentford with a performance which demonstrated their steel and a slick opener proved they can find the magic when needed.

Wolves will be bottom at Christmas but held their own for long spells and there remains reasons to be positive with Julen Lopetegui’s era imminent.

Introduced to the home fans before the game, Lopetegui took the acclaim during a lap of the pitch six years after Wolves first tried to appoint him.

A brilliant reception for our new boss 👏 pic.twitter.com/C0E8PPSlP7

It has been a long wait and the former Spain and Real Madrid manager will be expected to work wonders to beat the drop but will have the same problems as caretaker Steve Davis and Lage.

Lopetegui will need reinforcements in January – especially a striker – for Wolves to extend their top flight stay to a sixth season.

He will have at least been encouraged by the hosts’ resilience, despite defeat, which will be desperately needed during a relegation battle.

Arteta has no such problems and his team will be top at Christmas, something not even the most optimistic Gunner would have predicted.

The Gunners are spending Christmas at the top of the #PL table 👏 pic.twitter.com/CLQXIxXJYW

City’s surprise loss gave them the chance to take command at the top but they were initially frustrated by a determined Wolves.

Arsenal lost Granit Xhaka, forced off after 15 minutes after needing treatment, and replaced him with Fabio Vieira.

The Gunners dominated the ball but Wolves reminded the visitors of their threat when Goncalo Guedes fired over following a quick break.

Despite their territorial dominance Arsenal struggled to create clear openings, a credit to Wolves’ organisation.

Davis, ahead of his final game in charge, openly admitted to encouraging his side to use the darks arts to wring any advantage from a game and they managed to stifle the flow.

But a driving run from Saka created a chance for Jesus and, with a hint of offside, the striker hit the bar with 10 minutes of the half remaining.

The Brazil international, without a goal in his previous 10 games, then wasted a promising opening when he volleyed Ben White’s cross wide.

While it remained tight the struggling hosts were always in the contest and William Saliba gifted them a golden chance just before the break.

The defender’s backpass was read by Guedes, who had a free run on goal, but Gabriel came to the rescue to deflect his shot wide.

But if there were any growing Arsenal frustrations they disappeared 10 minutes after the break when Odegaard opened the scoring.

It was the first time the visitors wriggled in behind Wolves and, when a delightful ball from Jesus gave Vieira space in the box, his cross was turned in by Odegaard.

From then it was comfortable for the Gunners and Odegaard added a second with 15 minutes left.

Dexter Lembikisa lost the ball to Gabriel Martinelli who teed up Oleksandr Zinchenko to cross. The ball fell for Martinelli who was denied by Sa but Odegaard controlled the rebound and lashed into the bottom corner.