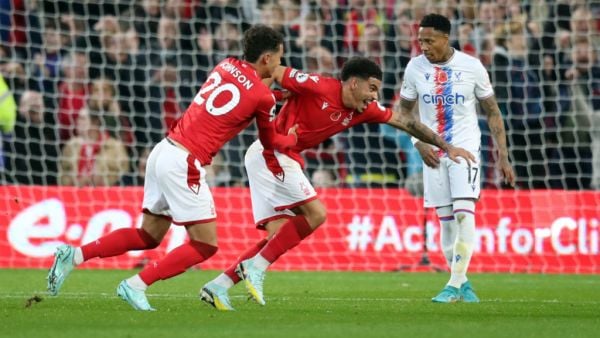 Nottingham Forest ensured they head into the World Cup break off the bottom of the Premier League with a 1-0 win over Crystal Palace.

Morgan Gibbs-White continued to show why Forest broke their transfer record to sign him in the summer as his second-half goal earned the win that sees them move to within a point of safety.

It was the perfect end to the first phase of their return to the top flight after 23 years away and will give them real hope they can kick on after the World Cup and pull away from relegation danger after a third win of the campaign.

They were grateful to Wilfried Zaha missing his fourth penalty of 2022 in the first half, but this was a poor performance from Palace which was deserving of defeat.

Patrick Vieira is battling inconsistency and they remain mid-table.

After some recent positive signs, including an impressive midweek Carabao Cup win over Tottenham, Forest were desperate to sign off with a win but made a slow start and Palace could have led inside the opening 90 seconds as Zaha barged into the box but shot over from a good position.

The hosts were full of pace and running in attack and that almost presented them with a goal in the 16th minute as Gibbs-White played in Brennan Johnson, whose cross-shot was just too far in front for the sliding Jesse Lingard to convert.

Lingard’s pace was causing problems and as he latched on to a flick-on he was brought down by Tyrick Mitchell just outside the area, with referee John Brooks deeming it to be only a yellow card with Joachim Andersen covering.

Renan Lodi whipped the free-kick over as Palace survived.

And 10 minutes later they had a chance to go in front as they were awarded a penalty after Forest captain Joe Worrall wrestled Zaha to the ground.

There was no doubt about the decision, but Zaha’s woes from the spot continued as he rattled the post with his effort.

Forest began the second half on top and were rewarded with the 54th-minute lead.

Johnson found space in the penalty area and got a shot away which was parried by Vicente Guaita and Gibbs-White was on hand to convert the rebound.

The linesman’s flag immediately went up but a lengthy VAR review saw the decision overturned and the goal stood.

It was a complete no-show from Palace in the second half and Forest had chances to kill the game.

Worrall put one wide when the ball fell to him in the box and then Lingard missed a golden opportunity after being teed up by Johnson, but he was off target with a controlled effort.

They had a nervy final few minutes but held on to record an important victory.