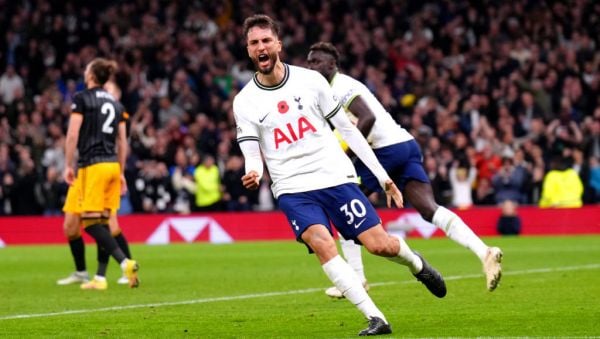 A dramatic late double from Rodrigo Bentancur fired Tottenham to a thrilling 4-3 victory over Leeds to help them finish the first half of the Premier League season with a much-needed win.

The visitors had gone ahead three times in London, but tasted defeat after Uruguayan midfielder Bentancur firstly levelled in the 81st minute before he grabbed what proved to be the winner two minutes later.

It meant Rodrigo’s impressive double and Crysencio Summerville’s opener for Leeds counted for little after Spurs mounted several fightbacks to end a tough period with a crucial three points.

Recent home league defeats to Newcastle and Liverpool, in addition to their Carabao Cup exit at Nottingham Forest on Wednesday, had contributed towards boss Antonio Conte reiterating the need for patience and time.

Injuries had played a big part in their mixed form during a period where they played 13 matches in 43 days but they concluded it with victory in a seven-goal thriller after talisman Harry Kane netted and Illan Meslier scored an unfortunate own goal.

Spurs entered this game following back-to-back defeats but Conte was boosted by attackers Dejan Kulusevski and Richarlison being able to start together for the first time since September 17.

All eyes were on Kane given this was the last match before the World Cup but it was the other number 10 on the pitch who stole the show early on.

Leeds’ young forward Summerville had struck in their recent wins over Liverpool and Bournemouth, and scored for the fourth consecutive game in the 10th minute.

Brenden Aaronson – one of 11 players starting this fixture set for Qatar – held off Pierre-Emile Hojbjerg and slid through to Summerville, who fired beyond Hugo Lloris after running too easily away from Eric Dier and Emerson Royal.

It was another horror start from Tottenham, but they should have levelled eight minutes later only for Emerson to slice over following Ben Davies’ cut-back.

The Spurs right-back had also tested Meslier moments earlier and yet the next big opportunity went the visitors’ way.

Aaronson sent Summerville away again but, despite Lloris briefly hesitating, the France goalkeeper was able to block the toe-poke of the Leeds forward.

It proved crucial with Tottenham equalising with 25 minutes on the clock.

Ivan Perisic’s inswinging delivery was only weakly punched away by Meslier to Kane, who brilliantly turned away from Tyler Adams and fired home for his 13th goal of the season.

Leeds remonstrated with referee Michael Salisbury and wanted a foul after Richarlison and Clement Lenglet both collided with Meslier but their appeals were waved away.

The frustration of Jesse Marsch on the touchline was eased when Rodrigo helped the away side retake the lead two minutes before half-time.

More poor defending saw Dier play Rodrigo onside from Rasmus Kristensen’s header forward and the Spaniard’s volley beat Lloris too easily to make it 2-1 to Leeds at the break.

Spurs needed a quick response and found one thanks to a hint of fortune six minutes into the second half.

Kulusevski got in behind the Leeds defence and found Kane, who saw a shot blocked by Kristensen. Davies was first to the follow-up and, while Kristensen got in front of his effort, he could only divert the ball onto Meslier and it rolled over the line.

Conte decided to replace the inconsistent Emerson soon after and it was met with unsavoury cheers from the home fans.

Replacement Matt Doherty would make an impact but only after Rodrigo fired in his second in the 76th minute after controlling Marc Roca’s pass and drilling into the corner beyond Lloris to make it 3-2.

A quick response occurred again with Doherty’s cross headed out to the edge of the area where Bentancur chested down and fired through a number of bodies to help Spurs level for a third time.

With nine minutes left, Tottenham were now chasing the all-important fourth goal and it arrived in the 83rd minute.

Kane set away Kulusevski, who dribbled past Robin Koch and was able to draw Meslier out of his goal which allowed the Sweden international to square for Bentancur to slot home his fifth goal of the campaign.

Leeds’ Adams received a second yellow card and his marching orders not long after before a topsy-turvy clash came to an end.