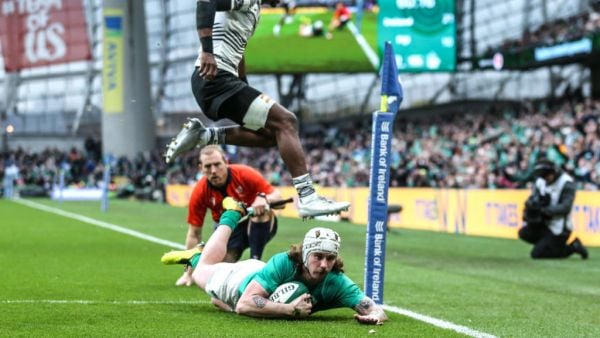 Ireland earned a 35-17 victory over Fiji at the Aviva stadium despite an uneven performance.

Flanker Nick Timony went over for two tries earning man of the match with his Ulster teammate Rob Baloucoune also crossing the whitewash.

The second half was a much more sloppy affair as it took Ireland until the 61st minute to score their first try with Mack Hansen touching down in the corner.

Fiji were reduced to 14 men after Albert Tuisue was shown a red card for a no-arms tackle on Joey Carbery. The Munster fly-half would be replaced by his club counterpart Jack Crowley after undergoing a HIA.

Cian Healy finished things off in the 73rd minute when he crossed over from close range.

In a major upset, Italy have beaten Australia for the first-time in their history.

The Azzurri held off a late fightback from the Wallabies to win 28-27 in Florence.

England head coach Eddie Jones comes up against his former team Japan at Twickenham this afternoon while Wales take on Argentina.

South Africa look to bounce back from their loss to Ireland when they take on France in Paris this evening.

The Black Ferns defeated England 34-31 in this morning’s final at Eden Park to be crowned champions for a sixth-time.

A second half strike from Joe Willock gave the Eddie Howe’s side all three points.

In the late game, Arsenal beat Wolves 2-0 to extend their lead at the top to five points.

Ivan Toney got over the disappointment of missing out on a place in England’s World Cup squad by getting both goals for the west London club.

It means Arsenal can go five points clear at the summit if they win at Wolves this evening.

Tottenham made sure they’ll head into the break inside the top four with a dramatic 4-3 win over Leeds who ended the game with ten men.

The first match as Southampton boss for Nathan Jones ended in a 3-1 defeat to Liverpool.

Nottingham Forest are off the bottom after their 1-nil victory over Crystal Palace.

James Maddison scored before limping out of Leicester’s 2-0 win at West Ham while Bournemouth ended their winless run with a 3-nil success against Everton.

Rangers have drawn 1-1 with St Mirren in the Scottish Premiership.

It means Celtic can go nine-points clear at the summit with a win against Ross County.

Jack Sheridan scored 1-11 as the Kildare kingpins defeated Offaly’s Shinrone 4-21 to 0-18 this afternoon.

Leitrim’s St Mary’s scored two late goals in a 3-8 to 1-8 win against St Kiernan’s of London in the Connacht Football Championship.