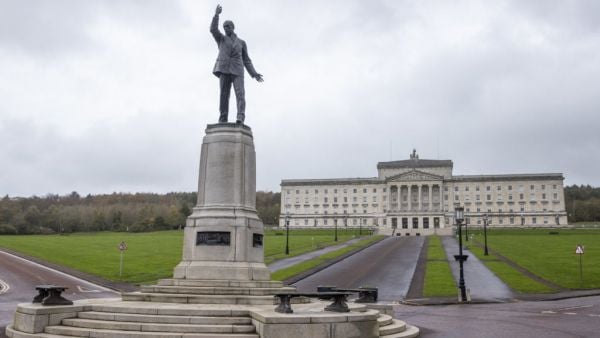 Sinn Féin and the DUP have strengthened their positions as Northern Ireland’s two largest parties, according to a new poll.

The popularity of the all-island party is up two percentage points on the last polling data in August to 32 per cent, while the main unionist party is up three points to 27 per cent.

The DUP is also up six points on its first preference vote result in May’s Assembly election.

The results were contained in the latest survey conducted by pollsters LucidTalk for the Belfast Telegraph.

Significantly, in respect of the ongoing powersharing impasse at Stormont, four out of five unionists continue to back the DUP’s boycott of devolution in protest at the Northern Ireland Protocol. This is down only two points on the last poll.

Of that 80 per cent, 49 per cent want the protocol removed completely while 31 per cent are seeking significant changes to the arrangements.

The findings will provide encouragement for DUP leader Jeffrey Donaldson amid efforts by the UK and EU to forge a compromise deal on the contentious post-Brexit trading arrangements.

In terms of the other main Stormont parties, the cross-community Alliance Party remains secure as the third most popular on 15 per cent, which represents a drop of one percentage point since August.

The Ulster Unionists are down two points to 9 per cent while the SDLP remains at 7 per cent. The TUV attracted 5 per cent of support, down one point on August.

The survey shows that Sinn Féin vice president Michelle O’Neill is now the most popular leader in Northern Ireland, with 46 per cent of voters believing she is doing a good or great job.

Her rating has increased by six points since August, enabling her to overtake Alliance Party leader Naomi Long in the popularity stakes – she sits on 45 per cent.

The online poll surveyed 3,351 people from November 4th to 7th.

Earlier this week, the Government extended a deadline for calling an election in Northern Ireland as it cut the pay of Stormont Assembly members.

Existing legislation gave the Stormont parties almost six months to form a ministerial executive following the last election in May, which saw Sinn Féin emerge as the largest party for the first time.

The deadline to establish a new executive lapsed on October 28nd, at which point the Government assumed a legal responsibility to hold a fresh poll within 12 weeks – January 19th.

Northern Ireland Secretary Chris Heaton-Harris has extended the deadline for parties to form an executive by six weeks to December 8, with the option of a further six-week extension.

With the Stormont deadlock intrinsically linked to the dispute over the protocol, the Government move is designed to provide more space for a deal to be struck between Brussels and London.

The 12-week clock for calling an election will now come into effect either on December 8th – meaning a poll would have to be held by March 2ns – or six weeks later on January 19, meaning an election would need to take place by April 13th at the latest.

Mr Heaton-Harris is cutting the pay of MLAs to reflect the fact they are not currently doing their job as legislators.

Salaries will be reduced by 27.5 per cent – a move in line with a cut imposed by the Government during the last powersharing impasse in Northern Ireland.