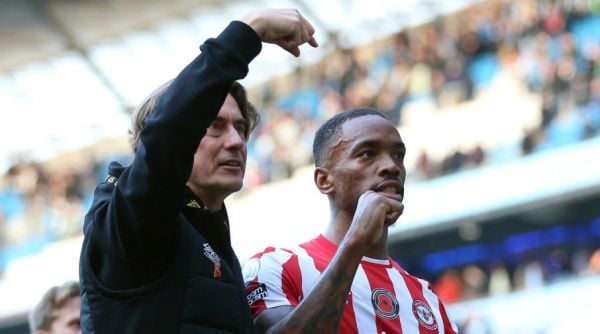 Brentford boss Thomas Frank held out hope there could yet be room on the plane to Qatar for Ivan Toney after the striker scored both goals in the stunning 2-1 win at champions Manchester City.

Toney shrugged off his disappointment at missing out on a place in Gareth Southgate’s World Cup squad on Thursday as he scored the winner in the eighth minute of 10 added on at the Etihad to seal what Frank called “maybe the best single ever result in the club’s history”.

But with the risk of injuries during this final weekend of Premier League action, Frank said Toney – who revealed last week he is assisting the Football Association with regard to historical betting allegations – should still be on Southgate’s radar.

“What a player,” Frank said. “Honestly. I know it’s a big story about the World Cup squad. I believe Gareth picked the strongest squad because of course as managers that’s what we do.

“But if there is an injury to one of the forward players I hope he will think about Ivan because he definitely proved it.

“This was a game in which we are playing maybe the best team in the world and he is scoring two goals and getting five chances, just getting on the end of things.

“People are defined by how they respond to setbacks. You either feel sorry for yourself or you respond back.”

Frank had promised his side would try to take the game to City and they certainly did that, creating three big chances inside the opening six minutes before Toney headed them in front 16 minutes in.

Although Phil Foden fired City level just before the break, Brentford did an outstanding job of frustrating their hosts who struggled to turn dominant possession into clear chances, with Erling Haaland well marshalled by the Bees defence.

City had 29 shots to Brentford’s 10 but Frank was justified in saying his side looked the more dangerous as they created the clearer openings – putting behind them a frustrating defeat at Nottingham Forest last weekend a shock Carabao Cup loss to Gillingham.

“All the credit needs to go to the players for a strong mentality, strong culture and to all the staff that do a top job here,” he said.

“In a situation where we have been struggling a little bit, we managed to find everyone in sync.

Every single one absolute heroes pic.twitter.com/DtWhMrYhtP

“To come here and, well deserved, beat City is mind-blowing. Probably, maybe, the best single ever result in the club’s history.”

It was a frustrating afternoon for Pep Guardiola, whose side could not summon the sort of energy which saw them beat Fulham with 10 men here last weekend.

“The better team won,” Guardiola said. “We had a lot of problems. We couldn’t make the high press because they didn’t allow it.

“When Toney flicked the ball he created problems. We couldn’t regain the ball…

“Their structure, and the striker being deep, they defended really well. We struggled to create chances.”

Sixteen of City’s first-team players will now head off to the World Cup – Guardiola expected Aymeric Laporte to be among them after the Spain defender finished the match heavily bandaged following a blow to the head.

They will spend Christmas trailing Arsenal in the Premier League but Guardiola said he was happy with the season so far.

“It’s been good,” he said. “We have lost and it’s more difficult but that’s the reality of the competition. We are close to Arsenal. Now we are a little behind but it is what it is.”