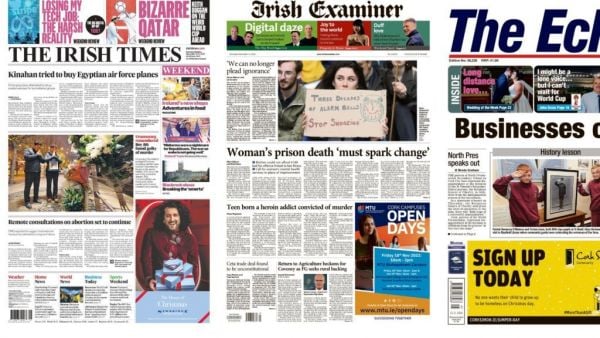 Saturday’s front pages focus on a range of stories from a member of the Kinahan gang trying to buy plans from the Egyptian air force, to a student climate protest demanding action from the Government. 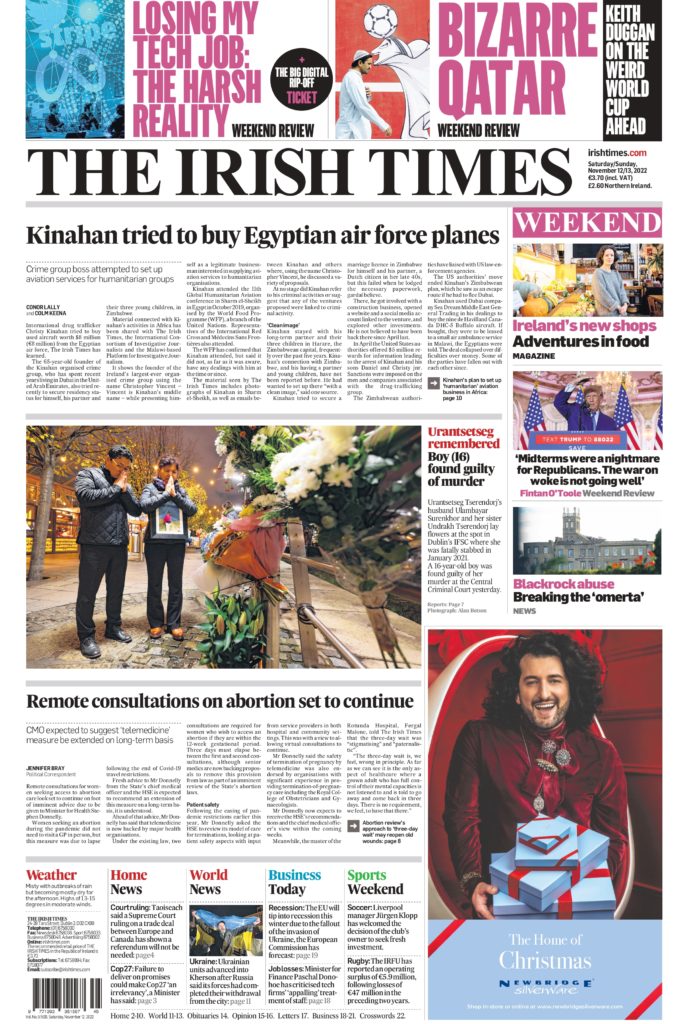 The Irish Examiner focus on a student climate protest outside Leinster House yesterday which accused the Government of inaction on climate change. 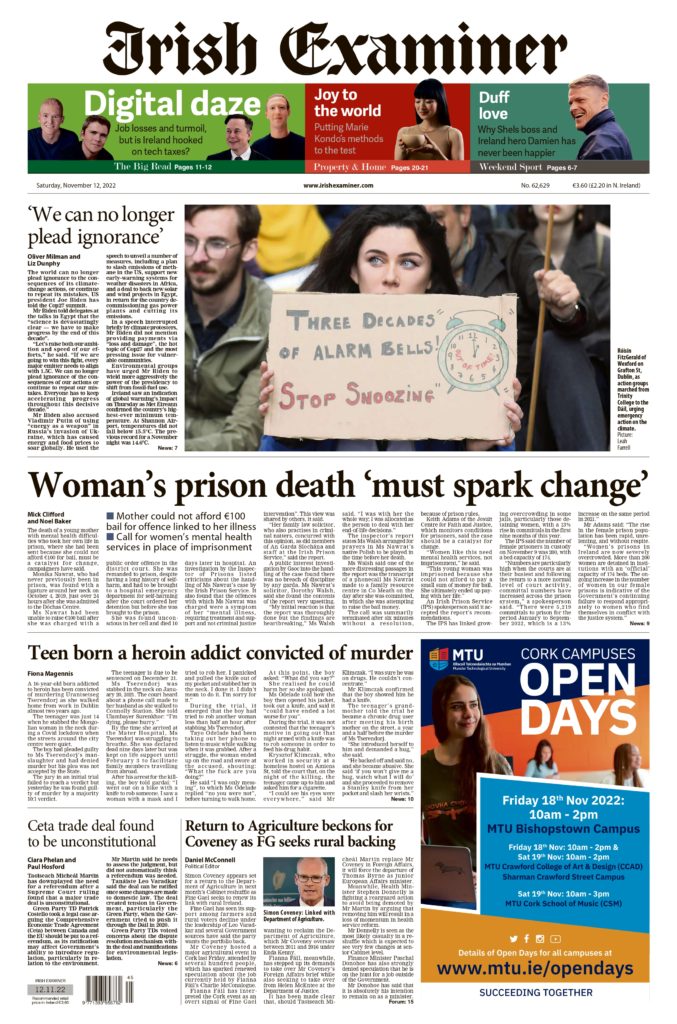 The Echo lead with a piece about Cork businesses fighting an uphill battle as they deal with accumulated debt. 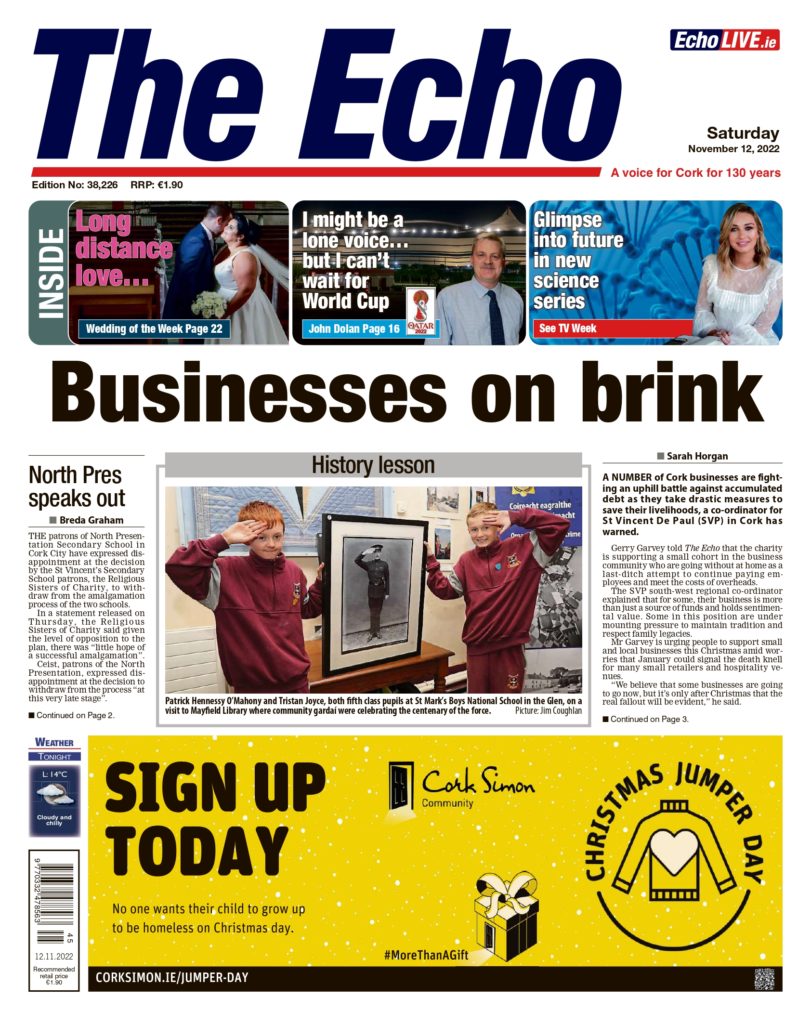 The Irish Independent focus on electricity and gas suppliers slashing discounts for new customers which could wipe away hundreds of euro in savings for customers.

The Irish Daily Mail focus on rural TDs in uproar over new plans from the EU commission which could see farmers lose swaths of former peatland.

– The anti-corruption garda who used the Luas to finish the marathon
– The day Prince Charles rang Dominic West’s wife to commiserate over those Lily James photos
– The dark side of children’s author David Walliams
All in Saturday’s Mail pic.twitter.com/XuNxj40wdp

The Irish Sun focus on a 16-year-old boy being found guilty of murdering Urantsetseg Tserendorj following a retrial at the Central Criminal Court.

The Belfast Telegraph focus on a new poll which shows the DUP are up three points as the deadline to call a Stormont election has been pushed back.

Morning, readers. Stay with @BelTel for all your breaking news. Here’s a look at today’s front page of the Belfast Telegraph.
To read the full newspaper on your device, go Premium+ ➡️ https://t.co/WfXEtzkTSl pic.twitter.com/MErUUjOP2C

Meanwhile, in the UK there are fresh complaints of “traumatising” work culture set by a senior Tory among the stories on the front pages.

The Guardian runs an exclusive report on allegations of bullying by Deputy PM and UK Justice Secretary Dominic Raab.

The iWeekend say the UK Prime Minister has decided to delay his growth plan as the UK “heads for recession”.

The Daily Mirror and The Sun lead on Matt Hancock’s apology on I’m a Celebrity… for breaking Covid restrictions while health secretary.

The Metropolitan Police Commissioner says strikes in the public sector may “hurt the war on crime”, in a warning on the front page of The Daily Telegraph.

Meanwhile, the Daily Mail reports the Met’s anti-terror chief Matt Jukes has been accused of “going woke” after wearing a menopause jacket at work.

The Times reports plans being considered by the UK Government would force care homes and hospitals to allow visitors in.

The Independent leads on Ukrainians in Kherson greeting soldiers entering the city after occupying Russian forces retreated from the city.

Our front page tomorrow #TomorrowsPapersToday @Independent@Beltrew in Ukraine on scenes of joy in Kherson, @LaurenFabianski with a message for Rishi, @BevanHurley tells the story of how a crypto guru lost $16bn in one day and @__adamwhite meets #TheCrown star Lesley Manville pic.twitter.com/9KoiwZY76q

A deal that would put British officials in France in a bid to stop migrant crossings may be signed over the next week, according to the Daily Express.

FT Weekend leads on the downfall of the “once high-flying cryptocurrency group” FTX.

And the Daily Star writes of a tiff between Britain’s Got Talent judge David Walliams and a contestant.

Saturday’s front page: I wouldn’t touch Walli if I won him in a raffle #TomorrowsPapersToday https://t.co/qSc5vw8Zly pic.twitter.com/iUkxDp6oKf