Explained: What do we know about the upcoming Cabinet reshuffle? 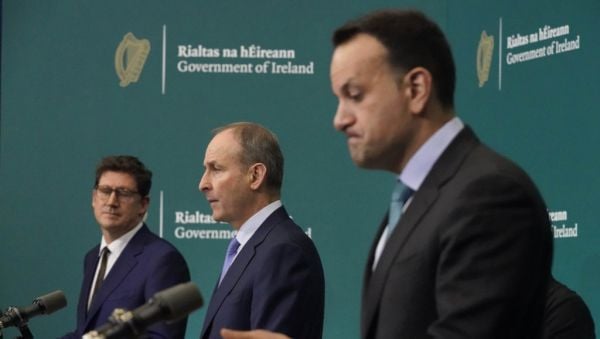 The position of Taoiseach will rotate within a sitting government for the first time next month, and with it a number of changes in Cabinet are expected.

So what do we know about what the changes in the government coalition will look like?

When will Leo Varadkar become Taoiseach?

Leo Varadkar will take over as Taoiseach on Saturday, December 17th.

The changeover was initially due to take place on December 15th, but the slight delay will allow Micheál Martin to attend the final EU leaders’ summit of the year.

What does that mean for Micheál Martin?

Mr Martin will take over as Tánaiste, but the ministerial role he will fill remains unclear. A straight swap with Mr Varadkar would see Mr Martin become Minister for Enterprise, Trade and Employment.

However, The Irish Times and Irish Examiner have reported that Mr Martin may become Minister for Foreign Affairs.

The role would give Fianna Fáil a prominent role in ongoing talks over Northern Ireland and getting the Stormont Assembly back up and running.

Current Minister for Foreign Affairs Simon Coveney would be moved in this scenario. In a recent interview with the Irish Independent, Mr Varadkar said Mr Coveney would “absolutely” retain a Cabinet role.

Such a move could make the enterprise, trade and employment role likely for Mr Coveney.

That said, others have suggested long periods abroad would be inconvenient for Mr Martin, as it would allow rebels within the party to question his leadership of Fianna Fáil.

What is going on with the Paschal Donohoe/Michael McGrath swap?

Another agreement in the Programme for Government included a changeover between Minister for Finance Paschal Donohoe and Minister for Public Expenditure and Reform Michael McGrath.

However, there was uncertainty over this with reports that Fine Gael would push for Mr Donohoe to remain in the role, as he holds the prestigious position of president of the Eurogroup (the European association of finance ministers).

An internal coalition row appears to have been avoided as there seems to be scope for Mr Donohoe to remain as Eurogroup president, with Mr McGrath also attending meetings.

While there will be changes for Mr Donohoe, and possibly Mr Coveney, the rest of the Fine Gael ministers could remain largely unchanged.

Minister for Higher Education Simon Harris is regarded as one of the rising stars in the party, and enjoys a larger social media following than any of his colleagues.

Whether he will take on a different, or more prominent, Cabinet role remains uncertain.

Mr Martin has already indicated Minister for Housing Darragh O’Brien will remain in his role. Minister for Agriculture Charlie McConalogue and Minister for Education Norma Foley are also expected to stay on.

Minister for Health Stephen Donnelly be may be left sweating over his position, as he is not thought to have strong support within the party.

As part of the Programme for Government, it was agreed that the Green Party will retain their Cabinet positions. They are: Eamon Ryan, Minister for the Environment, Climate and Communications, Minister for Transport, Catherine Martin, Minister for Tourism, Culture, Arts, Gaeltacht, Sports and Media, Roderic O’Gorman, Minister for Children, Equality, Disability, Integration and Youth.

With the main positions likely to see minimal change, there is more room for changes in junior ministerial positions.

On the Fine Gael side, the likes of Jennifer Carroll MacNeill and Neale Richmond have been tipped for more prominent roles.

Dublin TD Jack Chambers will be moved from the chief whipe role, as this will move to Fine Gael. He is highly thought of in Fianna Fáil, so he could receive a promotion.