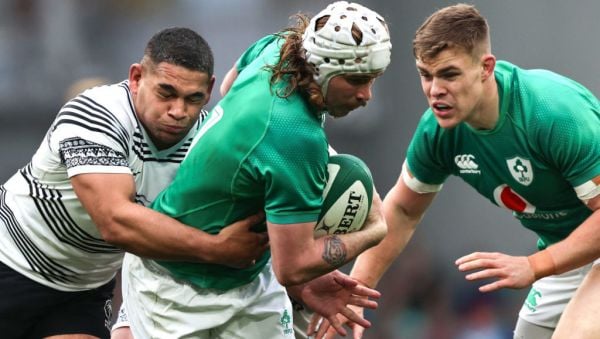 The Autumn Nations Series produced wins for England, Ireland and Wales as the month’s action reached the midway stage.

It is staggering to think that Freddie Steward is only 21 years old, yet is already among England’s most influential players and one of the few names inked on to the teamsheet for the World Cup.

Just 15 caps into his Test career and the 6ft 5in full-back is already approaching world class, a status that could be his if New Zealand and South Africa are successfully negotiated. A multi-faceted option in attack and imperious in the air, he has few weaknesses.

Thank you everyone at Twickenham and thank you @EnglandRugby for your warm welcome of our Brave Blossoms 🏴󠁧󠁢󠁥󠁮󠁧󠁿🙌#GoWithTheBrave | #ENgvJPN
pic.twitter.com/IDW1QM08it

It was hard not to watch Japan’s 52-13 capitulation at Twickenham with a tinge of sadness as the team that lit up the 2019 World Cup with a no-fear brand of daredevil rugby was instead a hesitant and incohesive mess.

The Brave Blossoms suffered more than most from the isolation caused by the pandemic with Covid-19 robbing them of the immediate chance to build on the success evident at the global showpiece they brilliantly hosted, and it must be hoped that one of the game’s rising powers can rediscover their mojo.

For those fringe players looking to challenge Andy Farrell’s thinking in selection, it was a sizeable step backwards. “I thought we were awful, I thought we were poor” was Farrell’s reaction to a 35-17 victory over Fiji that generated more questions than answers in his planning for next year’s World Cup.

Ireland sit atop the global rankings and have enjoyed a stellar year that is untarnished by an underwhelming afternoon against the Islanders, but the nine changes made because of a host of injuries to established players has only served to underline their importance to the team.

It was not pretty, but Wales showed admirable resolve and composure to put their Autumn Nations Series back on track by beating resurgent Argentina 20-13 seven days after being destroyed by the All Blacks.

Georgia and Australia will finish the year and Wales can enter those fixtures knowing they have the capacity to dig deep. It was a victory built on strong foundations, but they must prove it was not a one-off against opponents they are likely to face at next year’s World Cup.

Two results on Saturday have added to the expectation that the 2022 World Cup will be the most open yet as Italy claimed their first victory over Australia and France toppled South Africa in a mighty contest in Marseille.

Italy, the Six Nations’ perennial losers, have now posted consecutive wins against tier one nations and there are signs that the success of their age group teams is starting to filter through to the highest level.

Elsewhere in continental Europe, two red cards were seen in a titanic clash between title contenders that saw France give the clearest indication yet they have the nerve to win a competition they are hosting.