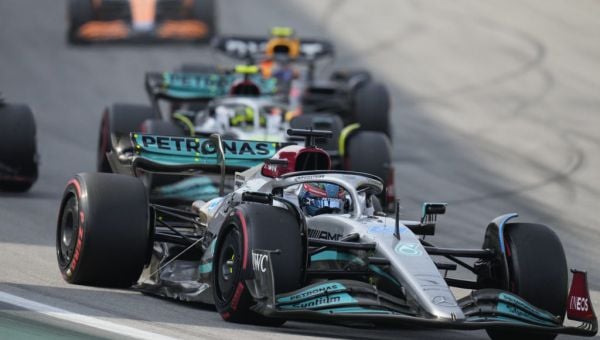 George Russell claimed the first win of his Formula One career as Lewis Hamilton and Max Verstappen collided at the Brazilian Grand Prix.

Pole-sitter Russell delivered an electric start at Interlagos before expertly surviving a late safety car as Mercedes finally got off the mark at the penultimate round of the season.

The 24-year-old follows in the footsteps of Hamilton, Jenson Button and David Coulthard to become only the fourth British winner of a Grand Prix this century.

Russell’s supreme performance, 24 hours after he triumphed in Saturday’s sprint race, followed another altercation between Hamilton and Verstappen.

Hamilton recovered from the collision to take second – unable to challenge Russell in an 11-lap dash to the flag – while Verstappen, forced to stop for repairs, and then hit with a five-second penalty by the stewards, finished sixth. Carlos Sainz took third for Ferrari ahead of team-mate Charles Leclerc.

Russell and Hamilton shared the front row at Interlagos, but it was the younger Briton who delivered the better getaway.

Behind Russell, Hamilton fended off Verstappen, but just nine corners into Sunday’s race the safety car was deployed.

Daniel Ricciardo, in possibly the last but one outing of his F1 life, bumped Kevin Magnussen under braking.

The Dane, who sprung the surprise of the season here when he put his Haas on pole position for Saturday’s sprint race, was sent spinning out of control, and then into Ricciardo as the Australian tried to navigate away from the accident he caused. Both men were out of the race.

Their stricken machines were removed from danger and the safety car came in six laps later. Russell’s restart was faultless, but Hamilton had Verstappen breathing down his neck.

Verstappen sensed an opportunity, and ducked out of Hamilton’s slipstream before going deeper on his brakes than the Englishman at the Senna Esses.

Hamilton held firm and Verstappen ran out of room, thudding into his rival’s Mercedes. Hamilton ran off the track, dropping down the order, with Verstappen’s front wing in bits.

“He left me no space,” complained Verstappen, who pulled into the pits for repairs. Unsurprisingly, Hamilton had a different version of events. “That was no racing incident, mate,” he said.

The stewards investigated the accident, and sided with Hamilton.

Verstappen was back on the radio following the stewards’ verdict.

“Where did they expect me to go?” he asked. “He (Hamilton) just closed the door on me, but it doesn’t matter.”

Hamilton dropped from second to eighth but was able to continue. The British driver made light work of Mick Schumacher, Pierre Gasly and Sebastian Vettel before moving ahead of Lando Norris on lap 14 for fourth, 10 seconds adrift of Russell.

After the opening round of stops, Hamilton moved ahead of Sainz for third, and on lap 45 he roared past Perez to the delight of the crowd to take second.

Russell was twice denied a brilliant victory – first through a Mercedes pit-stop mistake and then a puncture – as a remarkable stand-in for a coronavirus-hit Hamilton at the Sakhir Grand Prix almost two years ago.

On Sunday, Russell looked on course to cruise to the flag before countryman Lando Norris threw a spanner in the works when he broke down in his McLaren on lap 55. The safety car was sent out with Norris’ McLaren in a perilous position.

“So what are we doing?” asked Russell, with Hamilton suddenly in his mirrors. “Are we racing? Or securing a one-two?”

“You are racing,” replied his race engineer, Riccardo Musconi. “Just be respectful.”

With Norris’ McLaren out the way, the race fired up again on lap 60 of 71 and Russell delivered another fine restart to leave Hamilton trailing.

From there, his victory never looked in doubt, taking the chequered flag 1.5 seconds ahead of Hamilton as Mercedes completed a one-two finish.

Russell now leads Hamilton by 23 points in the standings ahead of next week’s concluding race in Abu Dhabi.