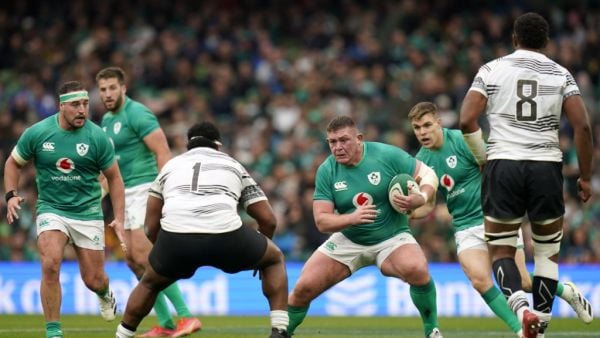 Andy Farrell’s men complete their autumn campaign against the Wallabies next weekend after backing up victory over world champions South Africa by beating Fiji.

While Ireland were claiming a disjointed 35-17 win over Vern Cotter’s side at the Aviva Stadium, much-changed Australia were simultaneously suffering a shock 28-27 loss in Florence.

The two-time world champions have lost 11 of 15 Tests during the past year following a landmark first defeat at the hands of the Azzurri and Furlong is braced for a response.

“I saw the result when I came off the pitch,” said the prop, who celebrates his 30th birthday on Monday.

“I suspect they are (a wounded animal). They’re a very proud nation. I’m sure they’ll be coming all guns blazing next week.”

British and Irish Lion Furlong became the 109th man to skipper Ireland, in the absence of injured fly-half Johnny Sexton.

The world’s top-ranked nation were well below their best on Saturday but recorded an 11th home victory in a row thanks to two tries from Nick Timoney, plus scores from Robert Baloucoune, Mack Hansen and Cian Healy.

“There’s stuff added to your prep that’s just a little bit different, but I’ve enjoyed it,” Furlong said of the experience of leading his country.

“It’s a massive privilege for me to be able to represent the group at that level. Thanks to the boss man (Farrell) for giving me the chance. Not many people get to do it.”

Ireland overcame a sloppy start in which they fell behind to Kalaveti Ravouvou’s fourth-minute try to prolong their fine form.

Fiji were a man down for most of a disjointed second half following the dismissal of flanker Albert Tuisue, while Manasa Saulo and Api Ratuniyarawa each spent spells in the sin bin.

“I know there was a lot of penalties, and we kicked and mauled a lot. Maybe that’s something to do with it. We never launched a massive amount, but it just felt a little bit stop start. We didn’t get into our flow where we could play multi-phase really.”

Head coach Farrell will now assess the state of his squad ahead of the autumn finale.

Robbie Henshaw suffered a recurrence of a hamstring issue and left the field inside five minutes, while Joey Carbery, who was floored by the red-carded Tuisue, and Jimmy O’Brien must satisfy head injury protocols.

Sexton, Hugo Keenan, James Ryan, Andrew Porter and Josh Van Der Flier have each been sidelined since last weekend’s win over the Springboks.

“I’m as curious as you are to get back into work and see how that is,” Farrell, who will have Bundee Aki back from suspension, said of the injury situation.

“The reality is is that the bodies that were missing this week haven’t trained with us at all because they’re nursing different injuries.

“Coming back into camp on Sunday night and how things flow from Monday morning is going to be interesting for us all this week.”