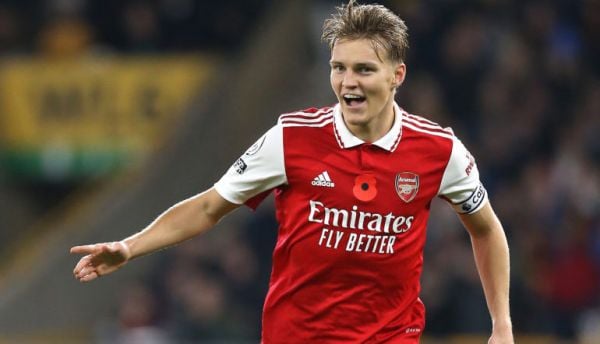 Martin Odegaard challenged Arsenal to improve further after they moved five points clear at the top of the Premier League.

The skipper’s second-half double sealed a 2-0 win at Wolves on Saturday to extend their lead over Manchester City.

City’s surprise 2-1 home defeat to Brentford allowed Arsenal to take control at the summit ahead of the World Cup break.

🏆 Our Player of the Match…

“We have to come back even stronger and better but at the moment, it’s looking good,” Odegaard told the club’s official website.

“We talked about it before the game and we talked about it at half-time – it’s difficult to play against these teams with five at the back. We had to stay patient. I think we did, and, in the end, we got the goals.

“It was a tough one, we had to dig deep. The first half was a bit slow – we were struggling on the ball to create chances really.

“They defended well and we know they’re always dangerous on the counter, so it was a difficult game.

“Then we changed a few things. We sped up the game a little bit in the second half and we know we have quality, so we’re always going to create something, but we did good to get the win.”

Wolves remain bottom and were watched by new boss Julen Lopetegui, who will officially take charge on Monday.

They are four points from safety and Ruben Neves knows the squad must turn the tide when they return next month.

“We have a break now, we’ll have a rest and it needs to be a new season for us after this. It’s our main target with a new coach,” the midfielder told the club’s official website.

“It’s hard to keep saying the same things. We want results, we’re working hard to get results but we’re not getting them.

“We did a good game on Wednesday and most of the game today we did it well, but it’s little details again. We let them create three or four chances and they scored twice. We need to improve.”