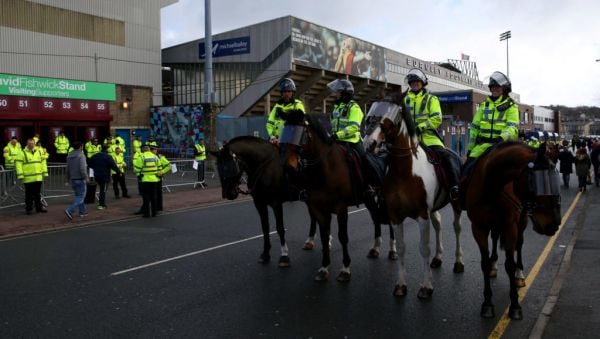 Lancashire Police are investigating after Burnley’s 3-0 home win against rivals Blackburn was temporarily halted by fireworks landing on the pitch.

Several fireworks, which appeared to have been let off from outside Turf Moor during the closing stages, landed close to the players and forced referee David Coote to briefly pause play.

After Burnley’s win had lifted them back to the top of the Sky Bet Championship, Lancashire Police praised the majority of fans at the derby clash for their good behaviour.

The police confirmed there had been five arrests, while a “small number of fans were ejected from the stadium”.

A police statement read: “We are also aware of isolated pockets of disorder and missile throwing during the game which will form part of the post match investigation.

“This will be thoroughly investigated by our officers and officials from both football clubs. Footage will be reviewed and the appropriate action will be taken against anybody involved.”

Assistant chief constable Russ Procter added: “Sadly, a minority of people’s behaviour has overstepped the mark and we have pro-actively intervened where necessary to make arrests.

“Although disappointing, I don’t want these isolated pockets of poor behaviour to detract from what has been a good, well-attended East Lancashire derby fixture.”