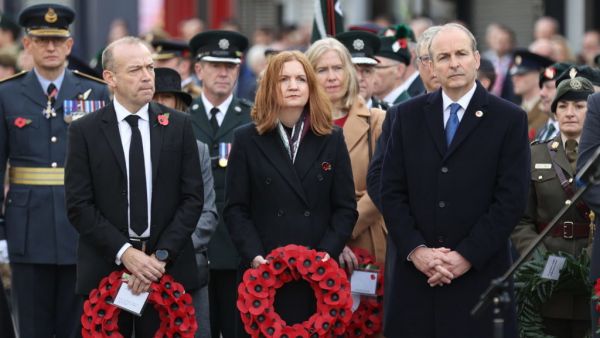 Taoiseach Micheál Martin and Northern Ireland Secretary Chris Heaton-Harris laid wreaths at a Remembrance Sunday ceremony in Enniskillen, 35 years on from an IRA bomb at the event.

Hundreds gathered in the Fermanagh town to mark the occasion at the war memorial.

They stood in silence for two minutes before wreaths were laid.

Mr Martin continued a recent tradition begun by former taoiseach Enda Kenny in 2012 by attending and placing a laurel wreath at the base of the memorial.

This was after Mr Heaton-Harris had laid a poppy wreath on behalf of the UK Government.

Jayne Brady, head of the Northern Ireland Civil Service, was among others who laid wreaths during the commemoration.

Earlier this week, events took place in Enniskillen to mark the exact day of the Poppy Day bomb, including a service at a newly installed plaque to the victims.

Eleven people who had gathered to pay their respects to the war dead were killed and dozens more were injured in the no-warning blast on November 8th, 1987, just minutes before Remembrance Sunday was due to start.

A 12th victim of the bombing died 13 years later having never woken from a coma.

Mr Kenny became the first taoiseach to attend a Remembrance Day service in Northern Ireland when he took part in commemorations at Enniskillen in 2012.

This move was symbolic of the greater recognition now afforded in the Republic of Ireland to those Irishmen who fought and died serving in the British Army in the First World War.

In Belfast, Lord Caine represented the UK Government at the cenotaph at City Hall, with Irish cabinet minister Heather Humphreys also in attendance.

Hundreds gathered both inside and outside the grounds of City Hall to observe the ceremony.