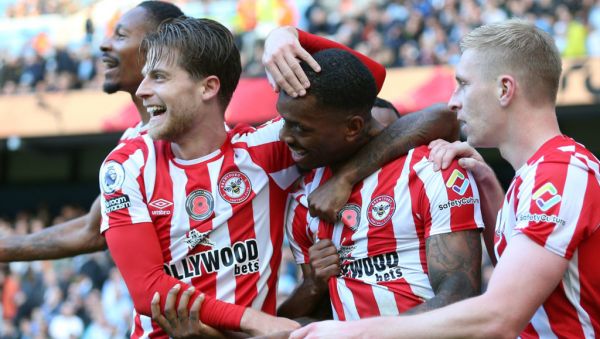 Brentford boss Thomas Frank felt his side’s stunning victory at Manchester City was all the sweeter coming against a side containing Erling Haaland.

The return of the prolific Haaland to City’s starting line-up for the first time in five games after injury had been the headline news prior to Saturday’s Premier League clash at the Etihad Stadium.

The Norwegian had scored 23 goals in his previous 17 City appearances but he was not only kept quiet by the Bees but completely overshadowed by Ivan Toney as Frank’s side snatched a surprise 2-1 win.

Toney, seemingly with a point to prove after being omitted from England’s World Cup squad, struck twice – including the injury-time winner – in a superb individual display that secured a first Brentford victory at City since 1937.

“Our performance was very, very impressive,” said Frank, who also hailed the result as the best in the club’s history. “We were playing against potentially the best team in the world, they came with their strongest line-up.

“I said to the guys before the game I really hope they play Haaland because it will only be a really big win if we beat them with Haaand in the line-up.

Frank had said he was determined to take the game to City and his side performed as promised.

They had already created two gilt-edged opportunities when Toney put them ahead with his first goal, a looping header in the 16th minute.

Phil Foden did level with a fine strike just before half-time but City were unusually subdued and frequently frustrated in the final third.

Toney, who was a constant threat, punished them by grabbing a winner in the eighth of 10 minutes of time added on mostly for treatment for injury to Aymeric Laporte. He could even have had a hat-trick before the final whistle but for a goalline block by Kevin De Bruyne.

With Arsenal winning later in the day, the result left champions City five points off the top of the table heading into the break for the World Cup.

“I think we could have been a little bit better in a lot of aspects of the game,” said Foden. “I think we gave it away too cheaply at times and if you look at the two goals they were avoidable and we are disappointed with that.

“Probably everyone expects us to win the game but this is the power of the Premier League. We know Brentford are a great team.

“Obviously we are down. We’ve lost a game of football, it’s not the best.

“We need to forget about it now and clear our heads, come back from the World Cup and try to go again. Once we get back we just want to start winning games and fix it.”