Antrim hospital closed doors to patients due to ‘unsafe’ conditions 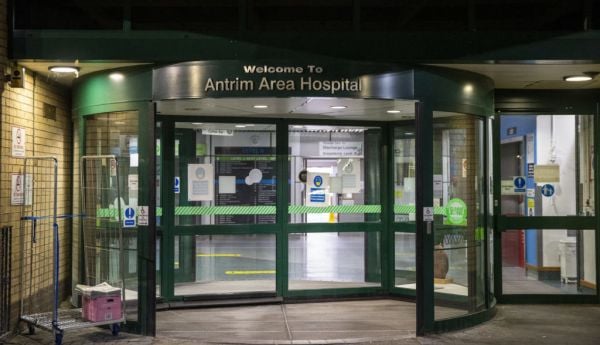 A Co Antrim hospital closed its doors to new admissions on Saturday night because conditions had become unsafe, a health chief has said.

A major incident was declared at the weekend when a high number of critically ill patients arrived in quick succession at the hospital, prompting the decision to temporarily close the doors to new admissions.

We continue to work in partnership with the Northern Ireland Ambulance Service to ensure that any patients who require urgent care are transferred and treated in other emergency departments. pic.twitter.com/1KYjsMAHxW

Ms Welsh said there were 45 patients in the ED on Monday for whom a decision to admit had been made, but for whom no bed is available.

She told the BBC Good Morning Ulster programme: “That would have been unthinkable about four or five years ago, we would have never seen numbers like that.

“Unfortunately coming in to 45 DTAs [decisions to admit] in the morning is now pretty much normal business and that is not acceptable.

“The situation remains extremely pressured, not just in Antrim but right across many of Northern Ireland’s emergency departments.”

“Antrim is well known in terms of not having enough beds. We do have extra beds commissioned but they won’t be coming until the end of February.”

Referring to the decision to call a major incident on Saturday night, Ms Welsh said pressure had been building for days.

“At the time we called the incident there were 131 patients and about 66 of them had a decision to admit and no bed available.

“At that stage our resuscitation unit was already full, it was over full.

“Then we got the news we had three more standby ambulances coming in. That is critically ill patients who had to be brought into our resuscitation department as quickly as possible and we simply could not cope.

“The safest thing to do in those circumstances is to call the major incident, to effectively close the door and what that means is that people are conveyed to the next nearest emergency department to ensure they begin the urgent treatment that they need because we were not able to do that.

“It was the right call to say that it was unsafe. It was unsafe at that time.”

The incident is the latest to hit Northern Ireland’s health service, which is facing significant budget constraints and spiralling waiting lists.

We urge the public to only attend our Emergency Department in emergency or life threatening situations, including mental health emergencies pic.twitter.com/02kyrZSPVx

On Sunday, the Belfast Health Trust appealed for available nursing staff to go to hospitals to help alleviate pressures.

On Monday, the Western Trust said Altnagelvin Hospital in Enniskillen, Co Fermanagh, was under extreme pressure and urged the public only to attend the ED in emergency or life-threatening situations.