Darragh Lenihan is looking up at Middlesbrough under Michael Carrick 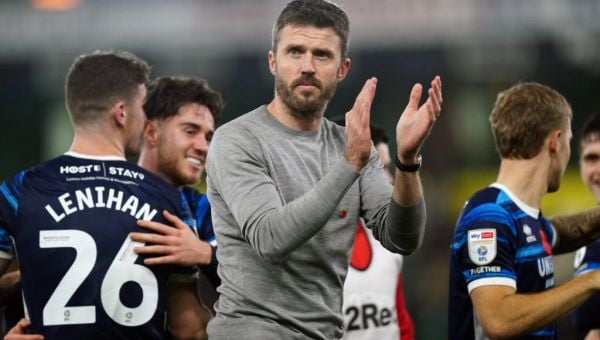 The 28-year-old defender met up with the Republic of Ireland squad having played his part in Middlesbrough’s impressive start under their new manager with Carrick having guided the Teessiders to victory in three of their last four Sky Bet Championship games to climb out of the relegation zone and to within four points of the play-off places.

Nottingham Forest staged a remarkable charge into the top flight last season and Lenihan, a summer recruit from Blackburn, is hoping Boro can do something similar.

He said: “As a young kid, you want to play in the Premier League and the Championship has that nature.

“You look at Forest last year – I don’t know when they were bottom of the league, but they got promoted in the play-offs.

“There is plenty of competition this year in the Championship, but hopefully we can be up there come the end of the season.”

Asked what a man who prospered under Sir Alex Ferguson during his time at Old Trafford had bought to the club, Lenihan said: “Obviously his experience as a player. I think he has won five Premier Leagues and a Champions League.

“He has brought in Jonathan Woodgate as well who has played for Middlesbrough and knows the club inside out, and also played for Real Madrid, so that experience alone gives us that confidence to push on.

“He has made a very big impression. It was a tough start and we expected to be higher in the table at the start, but it wasn’t meant to be. But how we responded in the last couple of weeks, the manager has been excellent.

“He gives simple messages but (is) very effective in what we want to do. I think he has brought the group together since he has come in.”

Lenihan’s focus over the next week or so will be to add to his three senior international caps when Ireland face Norway at the Aviva Stadium before heading for Malta.

He might have hoped to line up against Premier League sensation Erling Haaland on Thursday evening but the Manchester City striker is injured.

Lenihan, who took part in an open training session at the Aviva Stadium with this team-mates on Monday, said: “You want to challenge yourself and that’s why you play. He (Haaland) has been excellent for City this year and probably up there with one of the best players in the world, if not the best.

“Whether he plays or doesn’t play, we have to focus on ourselves, which is the main thing.”