‘Dick loved people, he loved life, but most of all, he loved his family’ 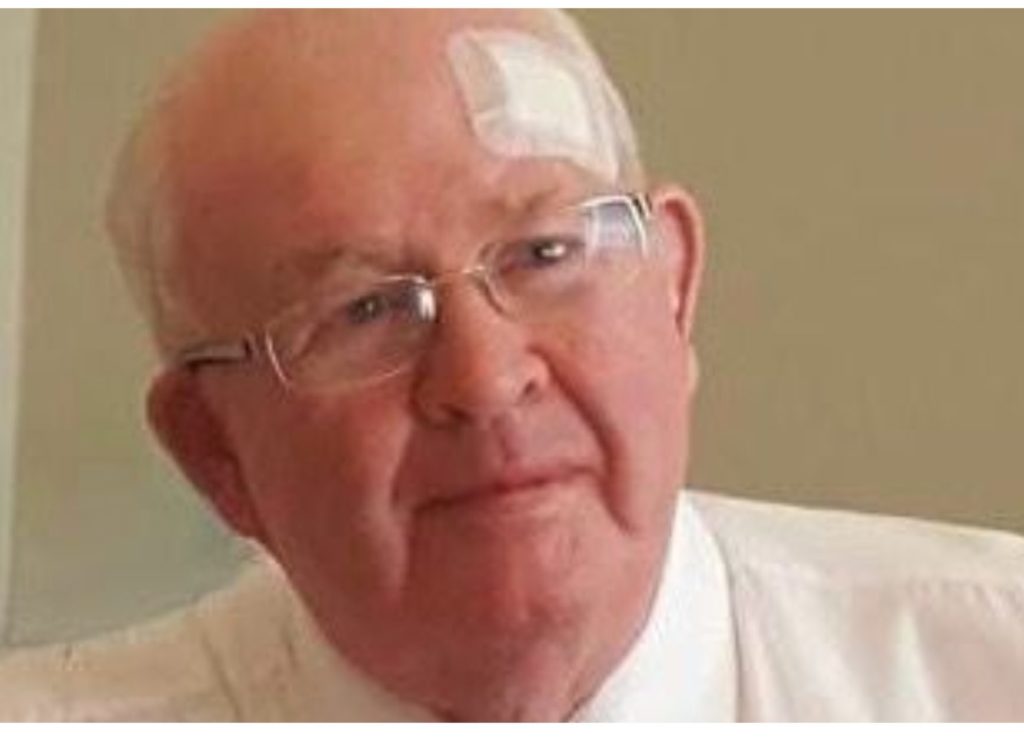 DICK (Richard) Gibson, Lackabeg, Kildavin, Co Carlow, whose death occurred peacefully at home on Saturday 15 October in the presence of his loving family, was deeply involved in the life of his native place, Kildavin.

Born on 18 March 1941, Dick was eldest son of Patrick and Bridget Gibson and brother to Pat and Mary. Having attended Pallaskenry Agricultural College in Co Limerick and receiving his certification in agriculture, Dick went on to farm. He supplemented his farm income by engaging in off-farm employment.

The life of Dick Gibson was expertly summarised by his eldest daughter Carmel during a eulogy at his funeral Mass on Monday 17 October in St Lazerian’s Church, Kildavin.

Carmel started her tribute by asking: “How do you sum up the life of Dick Gibson in a short eulogy reflection?”

Answering that question, Carmel said his was “a life well lived, is a legacy of joy, pride and pleasure; a living, lasting memory our grateful hearts will treasure”.

Continuing, Carmel said: “The last couple of days have taught us that Daddy was very highly regarded by so many people. A man born and reared in Kildavin and who, in August 1966, married the love of his life Joan Treacy in this very church (St Lazerian’s, Kildavin). Where, within the next six years, they welcomed four daughters – Carmel, Elaine, Charmaine and Tracy.

“Life was not complicated at Gibson’s – work, farming and pastimes. Dick instilled in his daughters a very strong work ethos, social consciousness and volunteerism. He epitomised this by the many organisations in which he became immersed – the GAA, Scór, Kildavin/Clonegal Drama Group, Cranavane Well, Community Alert, Kildavin Development, the Pioneer Total Abstinence Association (PTAA), Carlow Publications Committee and Macra na Feirme.

“To all these voluntary organisations, Dick gave 100% commitment either as an officer or committee member. His word was his bond; if he said he would do something, then he would, no questions asked.”

Carmel went on to reference her father’s “unwavering community spirit, his willingness to be the person to make the difference in his local area and beyond.

“He may not have had letters behind his name, but what he did have was the milk of human kindness – always there to help his fellow man or woman in whatever way he could.

“Volunteerism embodied Dick’s life, especially in the life he had outside of that: that of his own family. The family have been touched by the many, many stories, especially with people telling of their relationship with Dick. How he always praised young people with his words of encouragement and welcomed people into his life.

“Dick loved people, he loved life, but most of all he loved his family. He adored his wife Joan, his daughters and the stars that outshone us all – his grandchildren Sarah, Niamh and Adam. Their love gave him a new sense of what being alive was about, and in turn, he enriched their lives, too.”

Carmel told the congregation that her father’s accolades and achievements are many, but winning was always the objective where competition was concerned. “He loved to perform, he loved to see others perform, he loved to give people the opportunity to entertain.” Everyone who wanted to take part, particularly in the area of amateur drama, was given their opportunity.

“We, his daughters, were always given every encouragement in life to be the person we wanted to be, to respect others and respect ourselves.”

During the last few months, Dick’s health deteriorated and his family had seen their once strong, capable father become very ill. “I speak on behalf of my sisters in saying that it was a privilege to look after and care for Daddy while he was sick.

“We shall miss you, Daddy, but we love you, we will continue to be guided by you and will keep you forever in our hearts.”

Carmel extended the Gibson family’s thanks to all who travelled from near and far for his funeral Mass and burial and to everyone who had been there for the family at a time of such great loss. She thanked Fr Pat Hughes, PP, Kildavin-Clonegal and Fr Joe Fleming, CC, for their visits to Dick and particularly for their celebration of his funeral Mass. Carmel expressed appreciation to all who contributed in whatever capacity.

Dick Gibson was associated with Kildavin and today’s Kildavin/Clonegal GAA clubs for over 60 years, being club president at the time of his death.

He played for the Kildavin footballers in the 1950s and later, along with the late Andy Redmond, was deeply involved in the groundwork for the development of Spellman Park, the club’s playing pitch. It was a huge project, as the development of the pitch and its facilities had to begin from scratch. Kildavin had no home of their own until Spellman Park became a reality, with the official opening on 11 October 1970.

Dick was a constant presence at Spellman Park on days when GAA games were played at the venue. He manned the entrance gate and did whatever needed doing. Among the tasks he undertook was the mowing of the grass on the playing pitch.

Down the years, Dick held various positions in the club, including vice-chairman.

Dick Gibson had a long association with drama in Kildavin. He was a long-time member of the Kildavin/Clonegal Drama Group, with a great love of treading the boards. His love of amateur drama continued up to the time Covid-19 struck in the early months of 2020, which precluded any such activity. In his latter years with the drama group, Dick was producer of the many plays staged at the Spellman Hall, a role from which he derived great fulfilment.

As a leading member of Kildavin Development Association, Dick was involved with other volunteers in keeping the village and its environs looking their best at all times.

Dick and Joan had celebrated their golden wedding anniversary in August 2016.

A music lover, Dick was a great devotee of traditional Irish music, folk music and of André Rieu. His favourite musical instrument was the trumpet, even though he could not play the brass instrument.

A spiritual man, Dick had been a pilgrim to Knock Shrine on a number of occasions and also travelled with the Ferns diocesan pilgrimages to Lourdes.

Dick reposed at home in Lackabeg on Sunday 16 October, before removal that evening to St Lazerian’s Church.

A number of important symbols of Dick’s life were brought forward at the start of Mass, which was narrated by his daughter Tracy.

Readings at Mass were by Dick’s sons-in-law Mick Cox and Martin Mulcahy, while Prayers of the Faithful were recited by two of his daughters, Charmaine Cox and Elaine Mulcahy, and his three grandchildren Sarah, Niamh and Adam Cox. The singing of hymns was by Mary Crosby, Bunclody.

Following Mass, Dick was laid to rest in the new cemetery, Kildavin, with Fr Hughes saying the final prayers at the graveside.