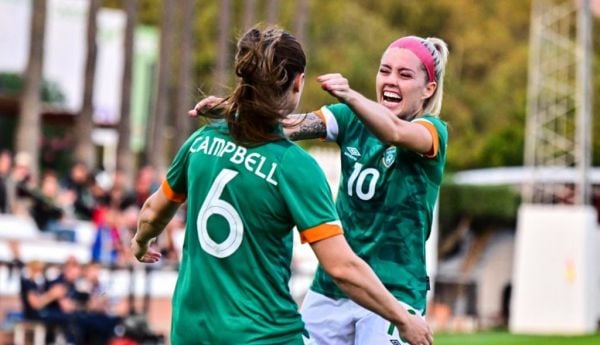 Louise Quinn marked her 100th cap with a goal as the Republic of Ireland eased to a 4-0 friendly win over Morocco in Marbella.

The 32-year-old Birmingham defender’s 16th international strike – the only one not scored with her head – came 15 minutes from time as Ireland started and finished strongly to cruise to victory over a much-changed Moroccan side.

Vera Pauw’s World Cup-bound team could hardly have got off to a better start when Megan Campbell curled home the opening goal with just two minutes gone, and it was 2-0 when Katie McCabe, having been tripped by Maryem Atiq, converted the resulting eighth-minute penalty.

Salma Amani passed up a good opportunity to reduce the deficit as the Moroccans responded and Lily Agg might have increased Ireland’s lead with a 31st-minute shot from distance which required a finger-tip save from Assia Zouhair.

McCabe saw a dipping 49th-minute free-kick tipped over by Zouhair, who then denied Amber Barrett from close range after spilling the initial corner as the Republic resumed in determined fashion.

This was the 10th game of an amazing year for WNT!!!#IRLMAR | #COYGIG | #WeAreOne pic.twitter.com/w4T7kdjU4q

Morocco were playing the more cohesive football as the half wore on, but Ireland extended their lead with 15 minutes remaining when skipper for the night Quinn blocked an attempted clearance after another McCabe free-kick had caused problems and saw the ball ricochet into the net.

Substitute Kyra Carusa celebrated her 27th birthday with a fourth, a neat glancing header from Aine O’Gorman’s cross, to wrap up a good night’s work.