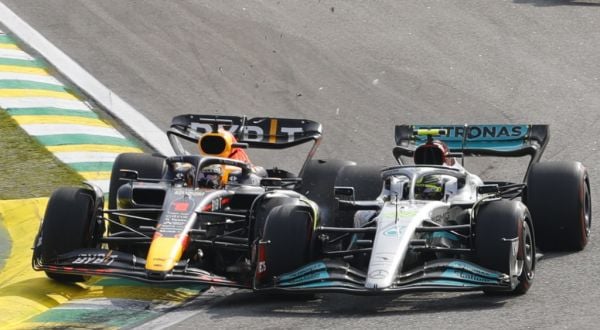 Lewis Hamilton hinted he is a collision magnet for Max Verstappen because the Dutch driver is envious of his record-breaking career.

Hamilton and Verstappen – who last year were involved in a toxic fight for the world championship – tangled on the seventh lap of Sunday’s Brazilian Grand Prix.

Hamilton recovered to finish second to team-mate George Russell, who drove impeccably to claim the maiden Grand Prix win of his career. Verstappen, who stopped for repairs, finished sixth.

The view from onboard, as Max and Lewis come to blows 💥#BrazilGP #F1 pic.twitter.com/2TRaFJFzO8

Verstappen’s march to a second title has passed off without a notable accident. But, with Hamilton back in the frame following Mercedes’ resurgence in Sao Paulo, Verstappen re-opened old wounds with his rival when he thudded into the seven-time world champion’s Mercedes.

Verstappen was penalised by the stewards, who found him “predominantly at fault” for the accident.

And, when asked if he felt singled out by the Red Bull driver, 37-year-old Hamilton, who has won more races than any driver in the sport’s history, replied: “It is natural when you have the success and the numbers on your chest, that you become a bit of a target. But that’s okay. It’s nothing that I have not dealt with before.”

Hamilton will arrive in Abu Dhabi for this weekend’s 22nd and final round of the season facing an improbable task of retaining his unique record of winning in every year of his career.

He also now looks set to finish behind Russell in the standings after his team-mate’s win – the first for Mercedes this season – leaves him 23 points behind.

But, despite his failure to get off the mark in 2022, Mercedes boss Toto Wolff, who will return to the paddock in Abu Dhabi after missing his team’s one-two finish in Brazil, says Hamilton will not be afforded preferential treatment.

Mercedes have endured a turbulent campaign but they could yet finish second in the constructors’ standings. With one round to play, they are 19 points behind Ferrari.

For Russell, his flawless win was a stark reminder of how far he has come. In 2009, the British driver was pictured waiting for Hamilton’s autograph.

To my family, my friends, my teammates and everyone who has been on this journey, thank you. I can’t put into words how much your support means to me and how much of a joint effort it has been. This win is as much yours as it is mine. We did it, together. I’m so proud of you all. pic.twitter.com/BC2PnM5sf7

“It is just unbelievable,” said the 24-year-old. “Firstly, how quickly time flies. It makes you realise you need to make the most of every single moment.

“Secondly, here we are 13 years later as team-mates on this journey together. Our goals have been clear, and we need to work together to get Mercedes back to where they belong.

“We have a good, honest, transparent relationship, and we are here to fight, and here to win.”