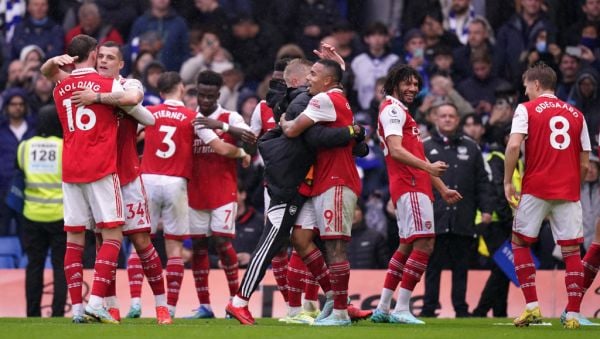 The break in the Premier League season for the winter World Cup in Qatar provides a period for assessment, reflection and – for some managers – reinvention.

Here the PA news agency takes at look at how all the top-flight clubs have fared so far.

First half of the season done ✔️
See you next month Gooners ❤️ pic.twitter.com/a7n4cggrXL

No-one – not even manager Mikel Arteta – could realistically have expected to be going into the break five points clear at the top of the table. The improvement from last season has been huge and five points dropped from a possible 42 with wins over Liverpool, Chelsea and Tottenham suggests a title challenge is genuine.

Three wins in four matches since the sacking of Steven Gerrard gives hope the remedial work has been successful with Unai Emery turning around a failing club, but that improvement has to continue.

Another club who have benefited from a new manager bounce, even if Gary O’Neil is only in a caretaker role. Since Scott Parker’s departure they have won three and drawn three of 10 games to bring some stability but they are far from secure in mid-table.

Signing off with a surprise victory over Manchester City was a major boost after just one win in eight but Thomas Frank, who guided the Bees to 13th in their maiden campaign, needs to find more consistency aside from headline-grabbing results against City, Manchester United and Leeds.

Prior to the departure of Graham Potter, the Seagulls were an A+ and while the disruption understandably stalled their progress Roberto De Zerbi, who saw his side claim a creditable draw at Anfield on his debut, has got things back on track.

Following an initial improvement after Potter replaced the sacked Thomas Tuchel, results have taken a nose-dive with no win in five league matches and a Carabao Cup exit. From the start of the season it was apparent something was not quite right at Stamford Bridge and Potter needs time to work things out.

Palace are where they almost always are – mid-table – but are dogged by inconsistency, having lost to the likes of Nottingham Forest and Everton, and Patrick Vieira needs to generate some momentum.

One win – and four points – in seven matches has seen Frank Lampard’s side revert to the form of last season’s relegation battle. Defensive resilience, something the manager had built his summer transfer dealings around, has evaporated and only bottom side Wolves have scored fewer goals, which has to be addressed in the January window.

A well-deserved call up for the 🐐.#FFC pic.twitter.com/WeI2XCDbp4

The Cottagers are currently exceeding expectations and have achieved that by beating – or not losing to – bottom-half teams to give themselves a cushion, but the form and fitness of Aleksandar Mitrovic still remains crucial to them.

A positive start to the campaign quickly faded and while they were rejuvenated by wins over Liverpool and Bournemouth, performances are still too erratic to gain any momentum and manager Jesse Marsch needs to find ways of controlling games better.

The Foxes have emerged from their early-season slump with four wins in five which has them upwardly mobile. Brendan Rodgers has seen off calls for him to be sacked but will need to maintain progress into the top half to prevent them returning.

Wildly inconsistent results have scuppered the Reds’ title ambitions and left them behind in the race for the top four. It has been a poor season, impacted significantly by injuries, by their usually impeccable standards but the signs are they are improving.

Another team whose sky-high standards have slipped slightly, dropping points against Newcastle and Villa, but prior to the weekend’s defeat their only loss in any competition had come at Liverpool. Arsenal’s form has highlighted the slip-ups but they remain the force to be reckoned with.

Erik ten Hag has had a few issues to deal with – most notably surrounding Cristiano Ronaldo – but has in the main done a decent job of changing the culture and style at Old Trafford. They are still prone to calamitous results, having lost to Brighton, Brentford and Villa, but their manager has them heading in the right direction.

A 10-match unbeaten run, including six wins in seven, has catapulted the Magpies into the top four well ahead of their new owners’ schedule. After eight points from their opening seven matches Eddie Howe has got under-performing players operating at their highest level.

Success this season for the newly-promoted side is survival and after a rocky start which increased the pressure on Steve Cooper, the manager, armed with a new contract, has stopped the bleeding and started to get results. A long slog ahead but not the hopeless task it appeared six weeks ago.

The Saints have become accustomed to mid-table security thanks to Ralph Hasenhuttl’s ability to ride out some horrific results but now his charmed life has come to an end and the appointment of Nathan Jones to his first top-flight job is a gamble with the club in the bottom two.

Despite some up and down results the mood is generally a positive one sitting just three points behind City with progress in the Champions League secured. There have been some late scrapes and Antonio Conte’s combustibility will make for an interesting second half of the season.

After back-to-back top-seven finishes it will be something of a shock to Hammers fans to find their side a point above the relegation zone. Four defeats and just one victory in the last six is at odds with their form in the Europa Conference League, where they have seven wins out of seven this season, and has put David Moyes under pressure.

The club has the air of one in terminal decline having sacked Bruno Lage and taken three attempts to recruit Julen Lopetegui, who has a mammoth task on his hands after inheriting a team which has lost seven of the last nine and scored just eight league goals all season.