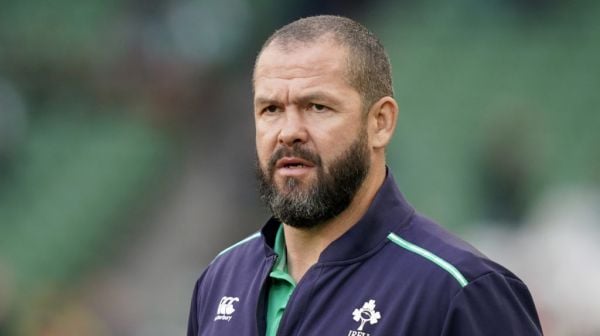 Ireland head coach Andy Farrell insists he is not concerned about the calibre of his fringe players as he conducts an inquest into a substandard showing against Fiji.

The Irish remain atop the global rankings and have enjoyed a stellar year which is untarnished by the sloppy display against the Pacific Islanders.

Yet, with the 2023 World Cup fast approaching, Farrell will be eager to ensure he has sufficient quality in reserve to cope should he be deprived of established stars at a more critical moment.

Asked if would read the riot act to players, he replied: “They know, they 100 per cent know.

“When you’re missing so much, then people know they need to try to fill that vacuum, but they need the experience of being able to do that at the same time. At least we know where we’re at.

“There’s a lot of big characters who weren’t in the changing room and I’m big on how certain people make people feel.

“We’d different leadership going on this week in all sorts of areas and it’s something we need to get to the bottom of and keep progressing with.

“Sometimes you get a performance and it leads you into a false dawn, doesn’t it?

“It’s good, especially off the back of a win, to get into the bones of it, to dig down deep and see what the reality is.”

While Farrell and his coaching team will be keen to find answers, they must also quickly turn attention to an autumn finale against Australia.

The Englishman is awaiting fitness updates on a host of injured players, including captain Johnny Sexton, ahead of Saturday’s Dublin showdown with the Wallabies.

Australia are expected to revert to their strongest team at the Aviva Stadium after a much-changed line-up was stunned by Italy, a week on from an agonising 30-29 loss to Six Nations champions France.

Farrell is confident the visit of the two-time world champions will focus the minds of his squad following the frustrations of the weekend.

“You look at their side (against Italy) and they made plenty of changes, probably because they are looking at us this week,” Farrell said of Australia.

“I know that it’ll be a tough enough week at the start of the week, but it will certainly focus the mind and we know what’s coming.

“Looking at their performance with a similar side that is probably going to be put out against us in Paris last week was probably more like it.

Italy claim their first ever win against Australia 🙌

“They were very strong, especially set-piece wise, they went after the French and nearly got the big ‘W’ over there.

Nick Timoney claimed two of Ireland’s five tries against Fiji, while Robert Baloucoune, Mack Hansen and Cian Healy were also on the scoresheet.

With his other two Test caps coming against the United States and Argentina, Ulster flanker Timoney is desperate to be involved in higher-profile occasions.

“I don’t want to be happy just coming and getting starts against the non-tier one nations,” he said.

“I want to be involved in the Test team properly, and contributing in the big games. I would love to be part of that (Australia).

“I would hate the idea of ever being happy about playing just in three Tests because there are knocks to others or whatever.

“I don’t know what will happen, there are world-class back-rowers ahead of me.”